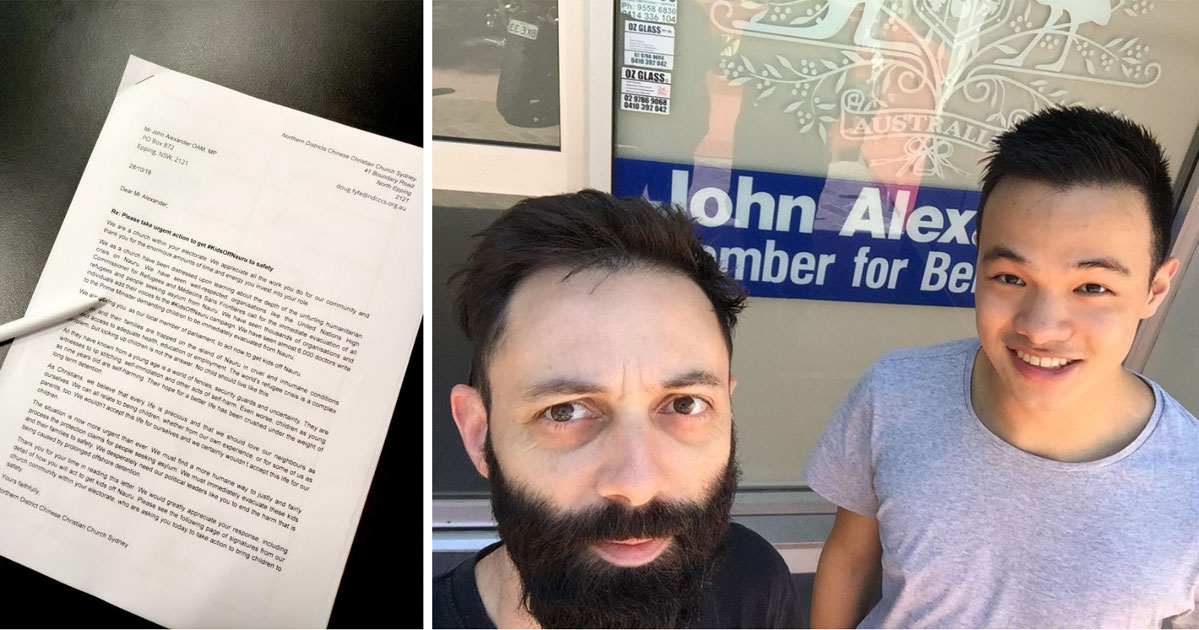 On the Wednesday 31st of October, my minister and I visited the office of John Alexander, the local MP for the electorate of Bennelong. We brought with us a letter signed by 100 churchgoers from Northern District Chinese Christian Church Sydney, calling for the immediate evacuation of children and their families from Nauru.

Clement (right) with his minister delivering their church letter to their local MP's office.

We were genuinely surprised by the way our church got behind the letter, as political involvement is often a tricky issue for churches.

The Church is united not by membership of a political party; rather, we become members of the church of God, through having been purchased by Jesus’ blood (Acts 20:28). The church is not a political party. This is further complicated by the fact that many political positions are not matters of biblical command, but of practical wisdom.

Over the past few months, one of the major impacts that we have seen from the Kids Off Nauru campaign has been its role in stirring up the political will necessary to bring about a response from our government. Without the political will generated, we can only wonder how many more children would still be held on Nauru at this moment.

The issue for churches is that, when we respond to policies that we disagree with by sitting discontentedly but quietly, we suggest to our representatives that they are doing a fine job. This is the unfortunate reality in a society where people are far more inclined to make themselves heard when they disagree with the current state of affairs, than when good, just and fair policies have been made.

For many at our church, we understand that at the heart of Christian ethics is the call to love God, and to love our neighbour. The greatest act of love that we can show to our neighbour, is to share the good news of Jesus. And this message should include a call to repentance from the way we have been treating the most vulnerable and marginalised minorities in our society.

As a result, many of us were convinced that not only was the current state of affairs unacceptable to us as Christians, but also that an action we could take to commend the truth of the Gospel as we preach it, was to make ourselves heard by those who we have chosen to be our representatives.