Once Upon a Time … [the start of any good fairy tale]

… there was a world where generations lived in harmony with the earth for thousands of years – except this was not a fairy tale. It was a reality in this island continent we call Australia.

And then came ‘industrial enlightenment’. For all the benefits that came from each technological breakthrough, also came costs – often driven by ignorance and/or apathy as to what repercussions ensued … or motivated by straight-up greed to wring the last ounce of productivity from the struggling environment.

Now we have a world in distress. This is accelerating.

We must be proactive to stem this ongoing degradation of our ecosystems. It has been well documented the unfolding effects of climate change – from the increasing frequency of extreme weather events to the rapid loss of entire species to agricultural disasters to the toll all this taking on the world’s poorest and most vulnerable. The collective ‘we’ can no longer sit back, remain ignorant, or pretend it is not important.

The opportunity to make a positive contribution to the discussion was presented by Common Grace CEO Brooke Prentis and their Knit for Climate Action campaign. Common Grace was getting ready to gift the beautifully woven climate stripe scarves that knitters had been tirelessly creating to help draw attention to the need for urgent, ambitious action on climate change. On #ShowYourStripes Day, June 21, Common Grace wanted to help send a clear message of the truth of our warming world and the need for our nation’s leaders to take action.

As a sculptor I was excited to use my skills to help create an artwork that would reflect the scale of change that we need to see happen on climate change!

Creatives have a long and intimate history with social justice issues, using a huge variety of methods to help tell a deeper story. Common Grace’s Knit for Climate Action scarves are a hunting, vivid and beautiful example of how art can communicate complex ideas in a simple way, prick a conscience, talk to people in an unspoken language that is both universal and accessible.

The knitting of these climate stripe scarves are also a gift of love, an act of generosity and gentleness to remind our political leaders that people (voting people) are concerned.

They are simple items that have deep symbolism of warmth and comfort, objects that have their root practical meaning in climate and weather.

To highlight this gifting, and the literal worldwide importance of this issue, we proposed the creation and display of the ‘world’s biggest knitting needles’. And so, the idea was formed.

Materials were gathered, construction was assembled, and they are BIG.

Today, Monday 21 June, in association with the act of gifting these lovingly created scarves, a pair of 5.4 metre long knitting needles, and the beginnings of a monstrous scarf, will be displayed in the front of Parliament House, Canberra.

My prayer is the size of the installation will resonate with the viewer as to the size of the problem that we face, and that with knitting the threads of our community together, we can start a positive dialogue and make the needed changes so that we can actively start to step by step make that ‘fairy tale of history’: responsible custodianship of the world a reality. 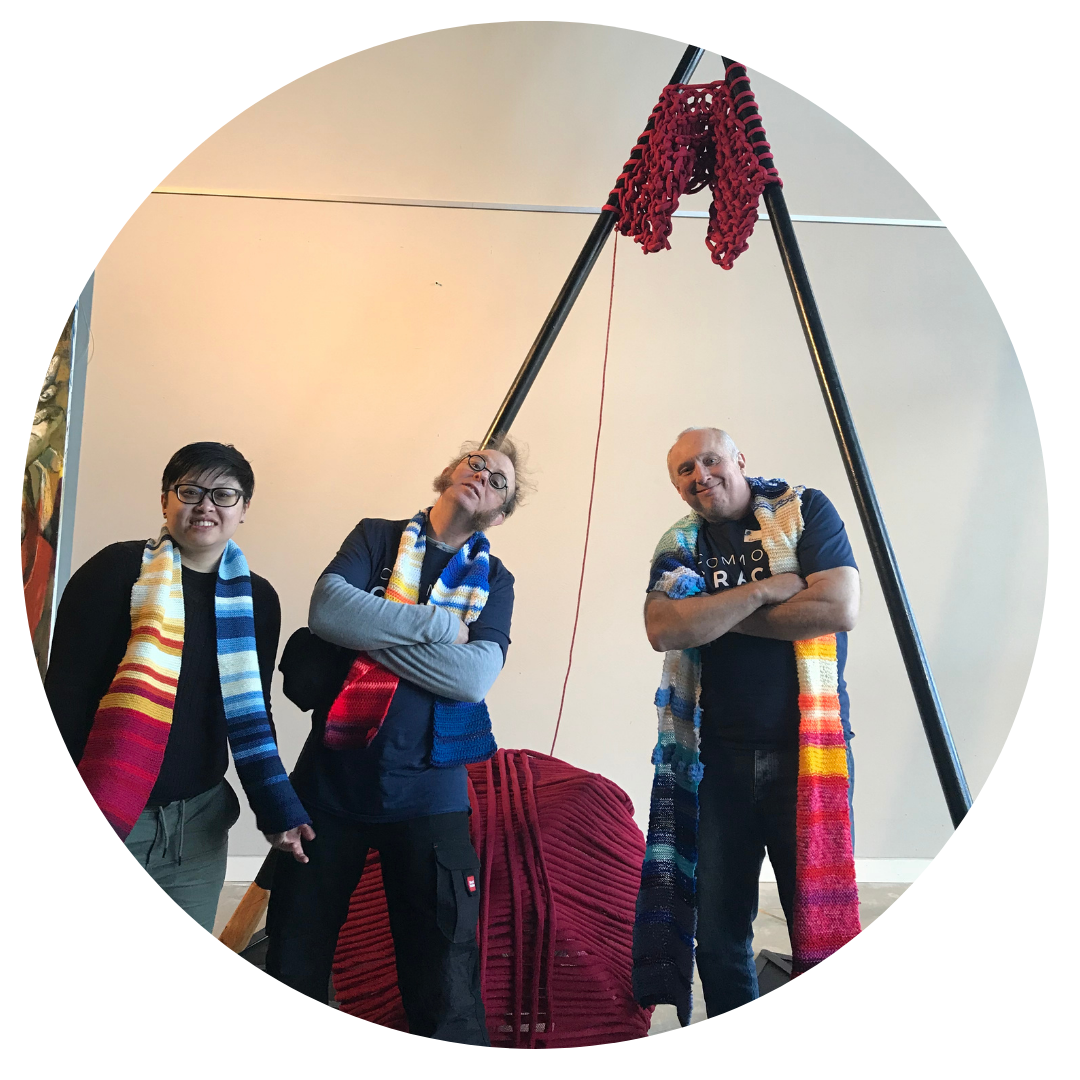 Keith Chidzey is a sculptor and land artist, driven by the magnificence and splendour of creation.

Supported by artists Kiki Tse and Stuart Matheson, Chidzy has created a sculpture of the world’s longest knitting needles, and boulder-sized balls of wool, to draw attention to the need for urgent, large-scale action on climate change. @chidzey.art @kikiagencey #sonliturgart