I sat with Julie Dowling’s painting, for quite a long time. So many emotions. Revulsion. Anger. Shame. Grief.

How can the title 'Stations of the Cross: Jesus falls the first time' relate to this painting of an Aboriginal girl surrounded by threatening figures, grieving and frightened figures, and graves?

On Good Friday, we grieve as we follow Jesus' journey to the cross. He carries a heavy wooden beam, on which he will be crucified. The weight is almost too heavy to bear, especially after he has been physically weakened by being tortured by the Roman soldiers.

But the real burden carried by Jesus is the sin of the whole world, including sins after his death and resurrection by people throughout history, including Genghis Khan, Hitler, Pol Pot, and his own followers. In the stations of the cross, Jesus is depicted as stumbling and falling under this weight.

In the years following colonisation, Aboriginal people were exploited, raped, and killed by settlers. Sadly, many church people from various church affiliations financially exploited Aboriginal people, and some exploited or tortured the bodies of children, men and women.

This picture and the artist’s explanation are confronting. We prefer not to face the horrors of the past, or to acknowledge ongoing racism and unfair treatment of Aboriginal people today. As church people, we are ashamed of past wrongs done in God's name, and grieve with Aboriginal people, also giving thanks for their resilience in the face of these centuries of suffering and unfairness.

This picture does not tell the whole truth about Christianity in Australia, but it does tell truth. And the artist's choice of title reminds us that Jesus knows and cares and is actively on the side of people who have suffered such horrific treatment. 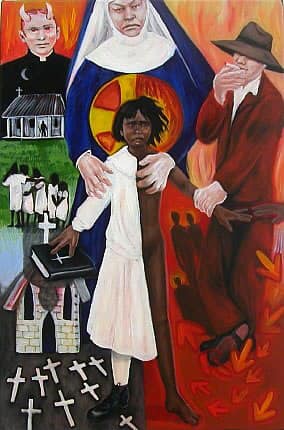 ‘Stations of the Cross: falls the first time’

Description:
‘...falls the first time’ comes from the Station of the Cross-, which depicts a young First Nation girl split in two.
To the right she is naked standing on red earth (her country).
A Wudjula father or welfare type figure smoking a cigarette pulls her hand away from her mother’s hand.
Through the land are tracks of emu (Waitch) going up towards the girl’s mother’s hand.
On the left side, the girl is dressed in white convent uniform with her hand on the bible which rests on the roof of a church with mission graves in the front. Above her hand is a group of children huddled together at night while in the distance stands a figure in the doorway of the church with a large stick about to flog them.
Above the dormitory is a oversized priest with devil’s horns.
Standing over the girl is the figure of a giant fierce Nun.
The Nun covers the girls naked breasts to teach her shame of her body and to turn away from her culture and love of nature.

Jill Firth is a lecturer in Hebrew and Old Testament at Ridley College, and an Anglican priest. She is a convenor of Evangelical Women in Academia.