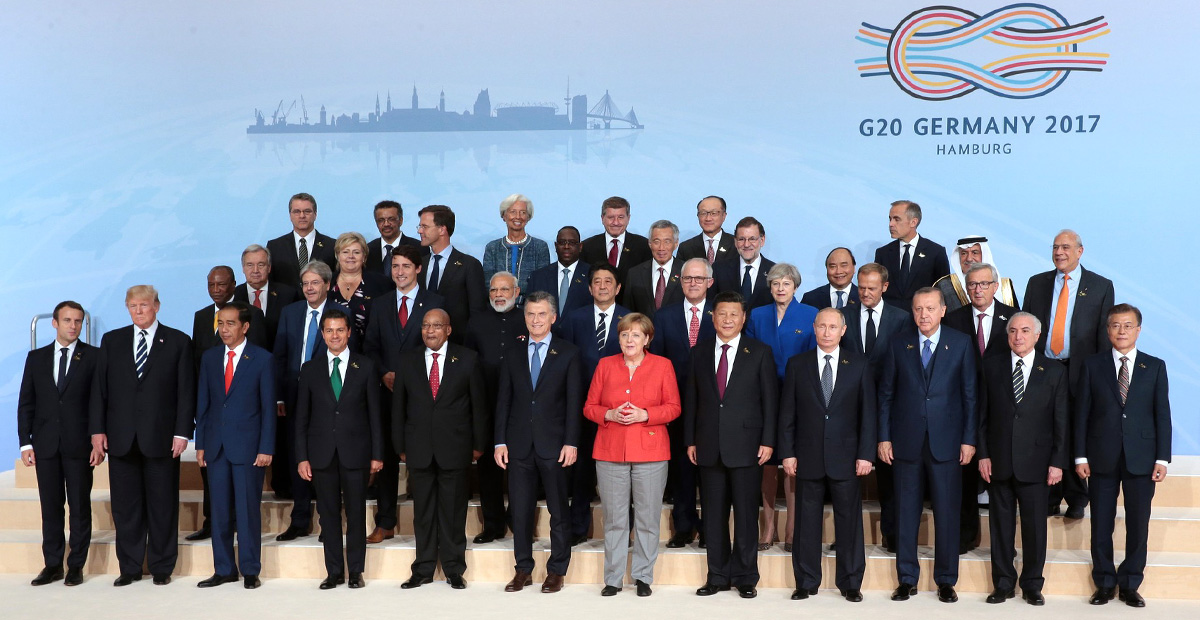 Under Hamburg’s towering monument to Otto von Bismarck, police from all over Germany gathered for this year’s G20 – the international forum for the governments and central bank governors of 20 major economies, representing 85 per cent of the global economy.

Within one of the chambers at the base of the Iron Chancellor’s monument is the text “Nicht durch Reden werden große Fragen entschieden, sondern durch Eisen und Blut - Great questions will not be resolved by talk, but by iron and blood". The G20, and gatherings like it, seek to prove the opposite, that the world’s great questions, including fear and hunger, are best resolved by talk and peace.

The Hamburg summit will be remembered for Donald Trump’s interaction with world leaders, including his first meeting with Vladimir Putin; the commitment of 19 out of 20 members to press ahead with the Paris Agreement on climate change, despite opposition by the United States; the spectre of terrorism; and protests by German youth trumpeting their anger at the system. Some protests turned to riot, police deployed teargas and water cannons on the streets as G20 leaders dined on delicacies after hearing Beethoven’s Ninth Symphony at Hamburg’s stunning new concert hall, the Elbphilharmonie, built over 10 years at a cost of 789 million Euros. But the protests were more often idealistic than violent, demanding a world without borders, classes, sexism, racism, patriarchy and oppression of the poor.

At Barclaycard Arena, a concert of a different type, headlined by Coldplay and Shakira, and attended by Canada’s charismatic prime minister Justin Trudeau, was the showpiece of the Global Citizen movement, which is imbued with a mission to fight extreme poverty within the global architecture, using celebrity incentives and market motivation.

“We have more tools than ever to end poverty: we can move money and knowledge to developing countries; prevent stunting; invest in education; support women entrepreneurs. We can give everyone a chance for a better life. We just need the will. We need all of you to keep raising your voices. Demand more from your leaders. Hold us accountable to make the world more just. One word defines this moment: possibilities. It’s possible to end extreme poverty by 2030.”

The final G20 communique had all the rhetoric and goals that World Vision and civil society might wish for, with a declaration and action plan focused on sharing the benefits of globalisation, building resilience, improving sustainable livelihood and assuming responsibility. A G20 Africa Partnership was also launched, in line with Angela Merkel’s chosen agenda of promoting sustainable and inclusive economic development, particularly in Africa, where poverty, conflict and climate change shape as a demographic time bomb for Europe. It is an issue that is already on the agenda for Argentina’s G20 summit next year.

“We are resolved to tackle common challenges to the global community, including terrorism, displacement, poverty, hunger and health threats, job creation, climate change, energy security, and inequality including gender inequality, as a basis for sustainable development and stability,” the G20 declaration said. “We will continue to work together with others, including developing countries, to address these challenges, building on the rules-based international order.”

To get this statement in a G20 communique is an achievement we should celebrate, along with a limited ceasefire in parts of Syria, $330 million pledged by the US to the World Food Programme for hunger in parts of Africa where famine has again reared its ugly head, and overwhelming international support for action on climate change.

We Christians, called to change the world in line with God's purpose, must be an active part of this global resolve.

While welcoming the G20's commitment, people of faith must be at the forefront of this manifesto for a fairer world and encourage leaders of the world's big economies to act on the pledges they have made to grow inclusively and sustainably and not leave the world's poor and disenfranchised behind.

We must continue to speak truth to power. As 1 Timothy 2 states, we as the body of Christ have the responsibility of intercession for all people— "for kings and all those in authority".

Our collective sense of peace and justice for all has clearly not yet reached the tipping point. But that doesn’t mean it cannot. Christians are called to unveil a pragmatic and inspiring view of a better world.

We want to encourage leaders who can shape a vision that is worth striving for. We want to inspire leaders who have the moral courage to take responsibility for their decisions and actions.

Every action touches on some chord that will vibrate through eternity. Ultimately, in this life, and certainly in the final analysis, we get what we give.

The good news is that social advance does occur when hearts are changed. There is hope.

Tim Costello is the Chief Advocate for World Vision Australia, and a member of the Common Grace board. Photo from WikiCommons.