This action has now ended. If you would like to take action on a similar issue, view our current actions.

This letter has now been sent to Senator Lambie.

Senator Lambie has announced that she will vote against Migration Amendment (Prohibiting Items in Immigration Detention Facilities) Bill 2020.

The original content on this page was as below:

In this letter, we as Tasmanian Christians call on Senator Jacqui Lambie to follow God’s call of love - to use her power to ensure that refugees and people seeking asylum in our country know care and welcome, not further cruelty.

Please sign the letter and join us, so that we may speak and pray for justice more strongly together - so that we can help make sure that our brothers and sisters in detention are able to continue to use their voices and stay connected with their loved ones.

As a constituent, your voice means a lot to Senator Jacqui Lambie.

You can add your voice to our call: Use the form on this page to add your name, postcode, and signature to this letter to her.

You must sign before 11.59pm Sunday 4 October 2020 so that the letter can be delivered to Senator Lambie Monday morning. 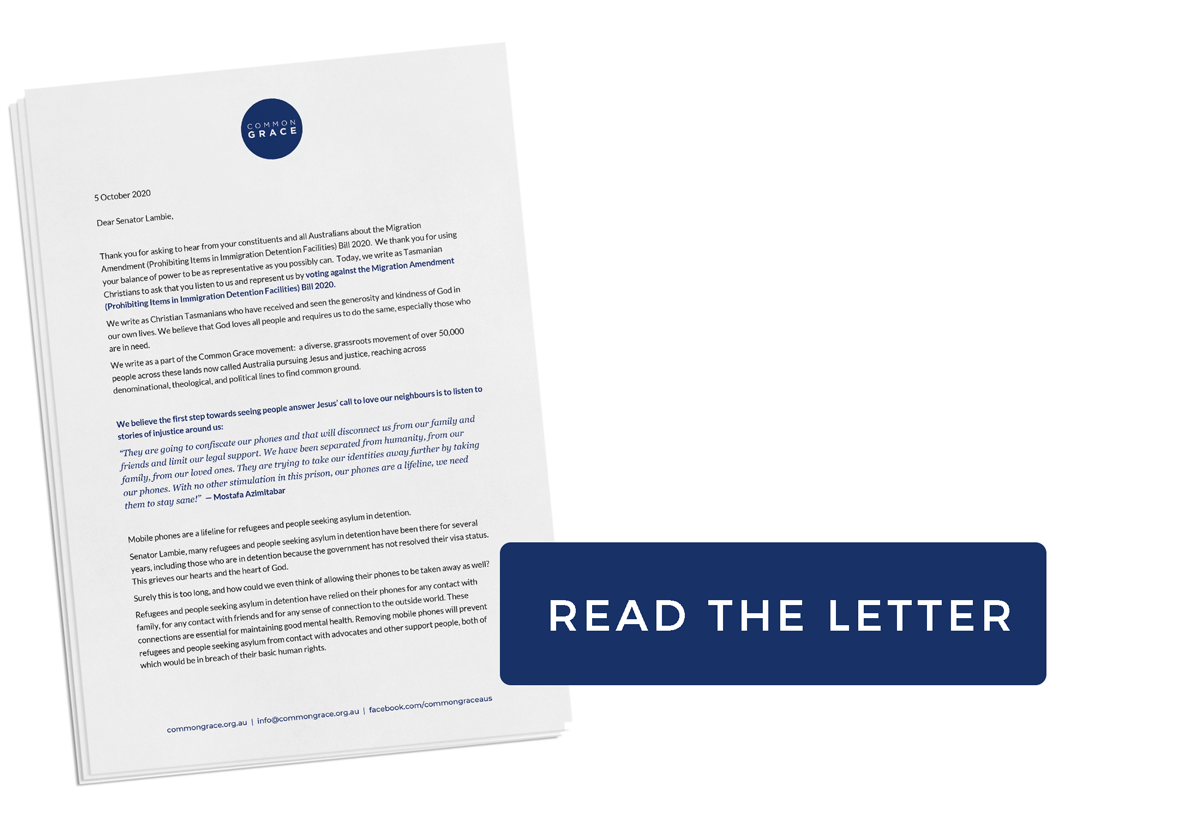 What is the Migration Amendment (Prohibiting Items in Immigration Detention Facilities) Bill 2020?

This bill, if passed as law, would enable the Immigration and Home Affairs Ministers to ban items such as mobile phones within immigration detention facilities,  and would increase officers’ search and seize powers with a lack of accountability. There are existing laws to ensure safety in immigration detention centres and the Minister for Home Affairs already has the power to seize people's phones through the police if necessary.

Mobile phones are a lifeline for people seeking asylum and refugees in detention.
Mobile phones are their only connection to friends, family and lawyers, and their only way of being able to speak up about their situation and hold officers accountable when they abuse their powers. (It has been reported that there have been more than 4000 assaults and excessive use of force incidents perpetrated by guards in five years.)

Without mobile phones, people seeking asylum and refugees in detention would be completely cut off from the outside world.

6 October: the next opportunity for the bill to be passed

In early September, this bill was passed in the House of Representatives.

In order for it to be accepted as law, it must also be passed in the Senate.
The Senate will next meet again on 6 October, therefore this is the next opportunity for the government to attempt to pass the bill.

Why is Jacqui Lambie’s vote key to the outcome of the bill?

Currently, all Senators have publicly voiced which way they will be voting on the bill, resulting in an even split of ‘yes’ and ‘no’ votes that hands Senator Lambie the deciding vote. Her stance on the bill will decide its outcome.

Senator Lambie has requested feedback from her constituents about the bill. She must hear that we, her Christian constituents, feel it is vital that she votes against it.

Since we started this call for signatures on Wednesday, Senator Lambie shared that she was nearing an announcement on her stance on this bill, so Brooke was able to contact the Senator's office to advise about the letter and the signatures gathered.

On Friday, Senator Lambie announced that she's heard the impassioned, well-reasoned arguments for why people do not want to see this bill passed and stated that she will not support this bill.

This is excellent news but this is not the end. Please still add your voice to our call and add your signature before Sunday night. The letter will be delivered to Senator Lambie on Monday morning.

Senator Lambie has asked to hear from you. Use the form on this page to sign your name to this letter so that Senator Lambie can hear your voice.

What else can I do?

1) Promote this cause on your social media channels today and in your faith community this weekend and encourage Tasmanians to sign on:

Direct people to read and sign the letter at this link: https://www.commongrace.org.au/tasmania_letter

2) Pray with us. In the letter to Senator Lambie, we have included a prayer written by Common Grace’s Justice for People Seeking Asylum Team. Read the prayer here