In the last five years we have called Australian Christians to take action for Aboriginal and Torres Strait Islander justice. One of the key areas has been for Aboriginal Deaths in Custody. This is Australia's #BlackLivesMatter. Aboriginal peoples who have fought for justice in this area have always stood in solidarity with #BlackLivesMatter as well as Indigenous peoples around the world who face injustice.

To bring about justice we need more people speaking up about injustice and demanding action from our Parliamentarians. We need solidarity. We particularly need solidarity for justice for Aboriginal Deaths in Custody.

12 months ago on 30 May 2019 for National Reconciliation Week we called for Reconciliation as Truth and Action - Stolen Lives Aboriginal Deaths in Custody. We re-released the same action this year asking Australian Christians to write to their State or Territory Corrections Minister and Police Minister about Aboriginal Deaths in Custody. We had already planned to ask you to take this action again, or perhaps for the first time, even before the recent events in the USA.

We remember George Floyd, (and Eric Garner, and Ahmaud Arbery, and Breonna Taylor, and Trayvon Martin, and Sandra Bland, and many others) and also the many Indigenous peoples of the lands now called North America who face similar situations but there is little to no media coverage. In solidarity this National Reconciliation Week please remember, raise your voices, pray for families and take action for Aboriginal Deaths in Custody.

86. a. The use of offensive language in circumstances of interventions initiated by police should not normally be occasion for arrest or charge;

87. a. All Police Services should adopt and apply the principle of arrest being the sanction of last resort in dealing with offenders;

161. That police and prison officers should be instructed to immediately seek medical attention if any doubt arises as to a detainee's condition.

And in Queensland and announced but not yet implemented in Victoria

79. That, in jurisdictions where drunkenness has not been decriminalised, governments should legislate to abolish the offence of public drunkenness.

At the 2019 #ChangeTheHeart prayer services I said:

Challenge yourself to be able to know three stories. Share their stories, advocate for action, change, and implementation of the Royal Commission’s recommendations and recommendations from Coronial Inquests.

We will remember their names and their stories.

Since then we've also learnt the names of Cherdeena Wynne, and Joyce Clarke, and Kumanjayi Walker, and Veronica Walker, and many others.  We will remember their names and their stories.

If you didn't realise, Recommendation 339 of the 1991 Royal Commission into Aboriginal Deaths in Custody is "...recommends that political leaders use their best endeavours to ensure bi-partisan public support for the process of reconciliation and that the urgency and necessity of the process be acknowledged." Why are we "In This Together" and #StillWalkingForReconciliation? This recommendation, that came from injustices, which still exist today, is one of the key reasons.

In 2018 on the release of the Guardian's "Deaths Inside" I said publicly, "We need to be outraged, and that outrage should drive us to action."

If you've shared about George Floyd and #BlackLivesMatter in the last few days please share about the over 500 Aboriginal peoples who have died in custody - but don't just share, be driven to taking action - please, please, please, take action.

Take action today and help us, Aboriginal peoples of these lands now called Australia, to breathe this National Reconciliation Week. 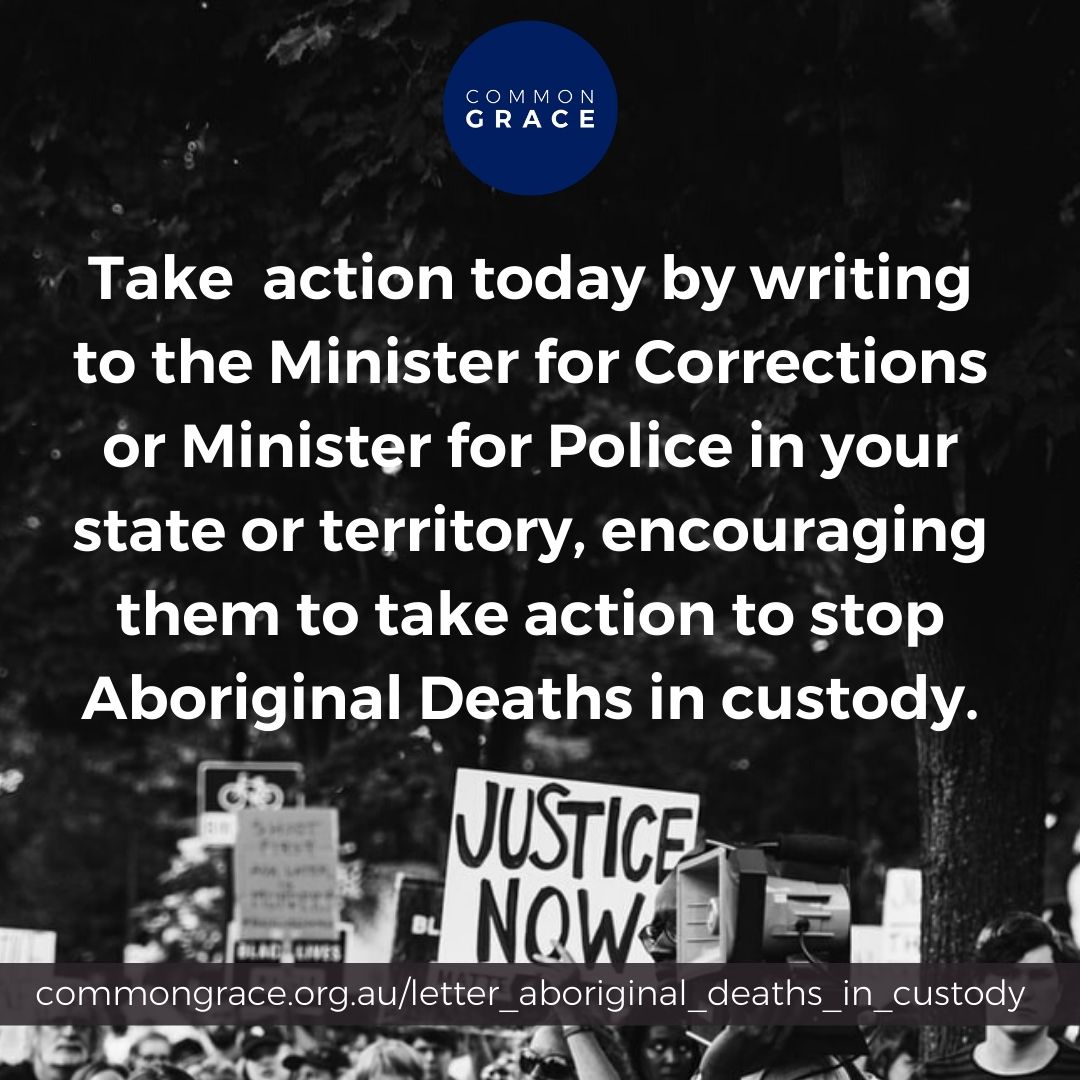 P.P.S. On 26th of September 2018 Common Grace called National Prayer Vigils on the anniversary of Wayne Fella Morrison's Aboriginal Death in Custody. These resources are here and some of the prayer resources can be found here.

Access the Prayer Vigil resources here to use in your church or small groups.