I’m feeling homesick this Advent. In the last four years living overseas I’ve delighted in the way Tanzanians do Christmas - it’s primarily a religious festival and it receives the same treatment as Eid or even Diwali - everyone gets public holidays, public spaces are decorated a little, and those who belong to that religion have services and feasts. That means a lot less commercialism, and for us, avoiding the complicated negotiations of families.

But this year I’m feeling the distance. We work with the university Christian movement here in Tanzania, and this year we’ll be at their conference over Christmas, and I’m wishing I could be somewhere else.

I’m remembering how my family watches the Channel 9 carols on Christmas Eve, stuffing ourselves with cheese and kabana, torn between rolling our eyes at the tackiness, and tearing up when Sylvie Palladino sings, no matter which carol she’s given. I love Tanzanian worship, and it’s guaranteed there’ll be plenty at the conference, but it’s not O Holy Night.

I know my youngest sister will be a total paparazzo during the present opening, and that everyone will laugh remembering my nanny to whom we used to give the same presents every year (a bottle of Baileys, some jelly lollies, and chocolate covered ginger) and she never cottoned on. This year the time difference means we couldn’t even Skype in for presents.

I know there’ll be a game of Charades in the afternoon, with balanced teams, carefully negotiated because by his own admission Dad’s a bit of a dead weight on any team, but Mum is equal to two maybe even three average players. Meanwhile I’ll be playing a kind of game of Charades in Tanzania too, the kind where you only understand 3/4 of what’s happening around you, but the remaining quarter is where all the important things are. I won’t be laughing; I’ll be feeling vulnerable.

It feels like I am so far away from the centre of things. My church will celebrate Christ’s birth without me. My family’s joy will bubble up despite my absence. 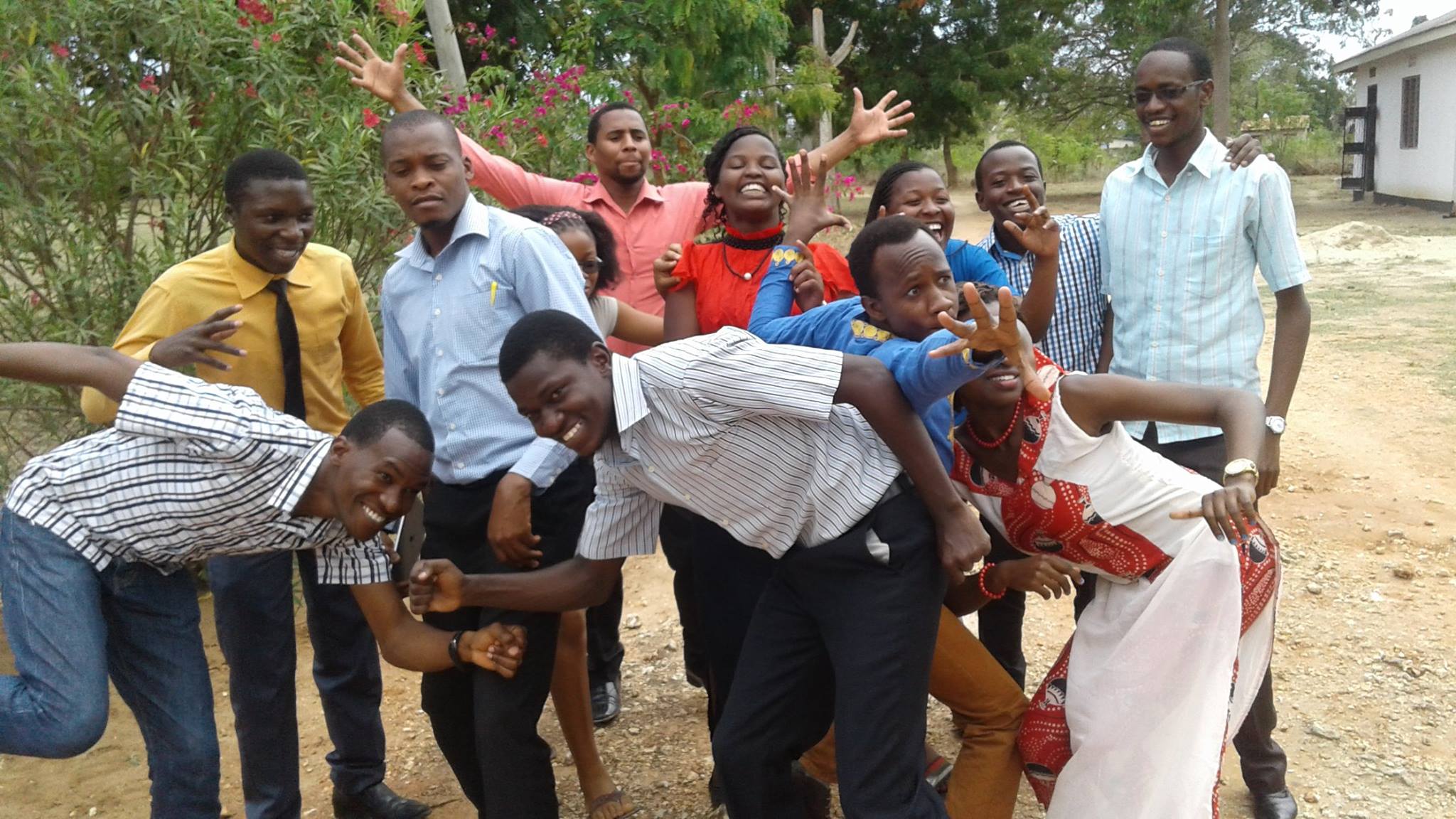 I have been reflecting on how being present in Tanzania instead of in Australia is a Christmas discipline, and especially an Advent discipline.

One of the startling things about Jesus’ genealogy in Matthew 1 is the inclusion of a number of women in Jesus’ line. They stand out because of their gender, and also because they are all marginal in some way. All but Bathsheba are foreigners: Tamar is the daughter of a Canaanite, Ruth is a Moabitess, Rahab is from Jericho. Bathsheba was married to a Hittite, but he was shown to be more righteous than the great king David who not only abused his position of power to commit adultery with Bathsheba, but then tried to cover it up, even to the point of arranging murder. Yet it is here, from those who are women, foreign, powerless and mistreated, that Jesus’ story is birthed.

And that’s entirely appropriate. Because Jesus was not born to privilege and power and wealth. His young parents were nobodies from a nowhere town. Yet this was where God chose to make his presence, where he comes to be with us, and to be one of us. And that continues to draw others into the story, from lowly shepherds to foreign star men.

Being somewhere other, being the other, including the other is a re-enactment of this Christmas story. To truly be present in Tanzania not Australia, with university students not our extended families, to sing songs that are not my own, is to follow our Master far from the centre to be with those on the margins, because this is where he chose to come, and where he comes still.

Tamie Davis lives in Tanzania with her husband and two sons where they partner with CMS Australia and the Tanzanian Fellowship of Evangelical Students.

The Genealogy of Jesus the Messiah

1 An account of the genealogy of Jesus the Messiah, the son of David, the son of Abraham.

The Birth of Jesus the Messiah

18 Now the birth of Jesus the Messiah took place in this way. When his mother Mary had been engaged to Joseph, but before they lived together, she was found to be with child from the Holy Spirit. 19 Her husband Joseph, being a righteous man and unwilling to expose her to public disgrace, planned to dismiss her quietly.20 But just when he had resolved to do this, an angel of the Lord appeared to him in a dream and said, “Joseph, son of David, do not be afraid to take Mary as your wife, for the child conceived in her is from the Holy Spirit. 21 She will bear a son, and you are to name him Jesus, for he will save his people from their sins.” 22 All this took place to fulfil what had been spoken by the Lord through the prophet:

23 “Look, the virgin shall conceive and bear a son,
and they shall name him Emmanuel,”

which means, “God is with us.” 24 When Joseph awoke from sleep, he did as the angel of the Lord commanded him; he took her as his wife, 25 but had no marital relations with her until she had borne a son; and he named him Jesus.

A Mantle of Peace

Our CEO, Scott Sanders introduces our "Being Present" Advent series with a reflection from Isaiah on what it means to pursue peace during this season.

Shane Fenwick, a Case Manager with Mission Australia and postgraduate theological student, reflects on his time in Jerusalem and the importance of making space for others this Christmas.

Bella Beach, a 17 year old student at Pacific Hills Christian School, reminds us in the midst of our Christmas planning to remember God's master plan.

Expectation and Waiting for the Just King

Cass Langton, Creative Pastor at Hillsong Church, reflects on the promise of a Just King and the calling for the Church to creatively reflect God's redemptive plan.

Anticipating joy in the midst of pain

Jane Kennedy from UnitingWorld reflects on her recent time in Indonesia and points us to hope and anticipation in the midst of pain and suffering.

Breaking down walls of exclusion

Erin Sessions, writer and lecturer at Morling Theological College, challenges us to break down walls of exclusion this Christmas.

Then I remembered it was Advent

Waka Waka woman and Common Grace's Aboriginal Spokesperson, Brooke Prentis, exchanges the bitterness of 2016 for God's hope and love this Advent, and invites us all to do likewise

Being present with the persecuted

Mike Gore, CEO of Open Doors Australia, invites us to be present with the persecuted church and challenges us to share the most precious gift we have.

Things get real when present with God

Jacob Sarkodee from St Jude's, Melbourne and Anglican Overseas Aid reflects on the reality of God's presence during this season.

Tim Costello from World Vision Australia, reflects on how we can learn from John the Baptist, and become non-conforming heralds of an unconventional, gracious and present God.

Byron Smith - Ecological Ethicist and Anglican Assistant Minister - reflects on his battle with cancer, the fear that accompanies living in the shadow of death, and God's peace that breaks with the dawn.

Present in His Presence

Susan Sohn - Host of GetRealLive Radio and the co-host of Real Talk Radio - reflects on her year of discovering the presence of God in quietness, and the challenges that families face in the Christmas season.

A Mother’s Song and a Mother’s Love

Kristyn Crossfield, Director ACTU Leadership Programs and Common Grace Board Member, reflects on Mary's song from her own perspective as a mother.

The Women of Christmas

Julie McCrossin - journalist, broadcaster and Elder at South Sydney Uniting Church - reflects on the women of Christmas and what we can learn about being open to the incomprehensible; emotionally engaged in the practical; and responsive to our powerful, trinitarian God.

Mary, Mary, quite contrary, turning upside down our world most scary

Present in the Mess

Rachel Neary - who works in Community Development and Training at Alice Springs Women's Shelter and is a key member of Common Grace's Domestic and Family Violence Justice Team - writes about being present in the mess of life this Advent.

Good Samaritan Sister Elizabeth Delaney, General Secretary of the National Council of Churches in Australia (NCCA), reflects on witnessing to the love and mercy of Jesus, the Incarnate Word.

The Art of Welcome

Aboriginal and Torres Strait Islander artist Safina Stewart, together with Brooke Prentis, contemplates the spiritual art of welcome this advent.

Present at the Birth

River Bennett & Bel Pangburn - birth photographers at 'The First Hello' - reflect on being present to the wonder of the night when Jesus was born.

Jarrod McKenna, the Teaching Pastor at Westcity Church and Co-Founder of First Home Project, reflects on the agony and the holiness of real hope this Christmas.

Born in our Hearts

Father Shenouda Mansour - General Secretary for the NSW Ecumenical Council, and a Priest in the Coptic Orthodox Church - considers our common calling to live a life of grace, as Christ is born in our hearts.

Present, But Not Home

Tamie Davis - a missionary in Tanzania with CMS Australia, partnering with the Tanzanian Fellowship of Evangelical students - reflects on the heartache of being away from her Aussie homeland at Christmas, and determines to be truly present in her Tanzanian community.

Marcello is a 24 year old member of Westcity Church in Perth. Before he had to flee his home in Iran, he was a champion Greco-Roman wrestler. He prays he might help other people and show them Jesus.

Good News for All

Kylie Beach, Common Grace's Communications Director, closes our Advent Series with a celebration of Christ's birth as good news for all. Even animals.