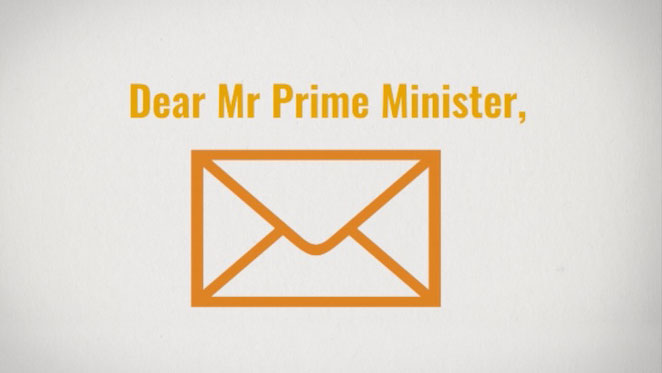 Please share this open letter to Prime Minister Turnbull from ‘The Australian Mamas" on your social media, whether you are a Mum or not, with a message of solidarity and the hashtag #BringThemHere (yes, even if you are a bloke!).

For those of us in the Common Grace community, we know that this open letter video (despite its cheeky tone) is serious in every way, and is actually the same message that we’ve been saying since we first began. We want our leaders to treat the people who come here looking for safety with compassion and generosity and we are prepared to say it in as many ways as needed so that we see change.

In Romans 12 we're exhorted to 'mourn with those who mourn' and this week there has been nothing to do but weep with the horrifying stories told to us by the lives of those on offshore detention. And the same scripture also calls us to 'overcome evil with good', and so we continue to pray, speak and act for the good of those whose voices do not seem to be heard.

For those who aren’t up to date with the last couple of weeks in Australian news, please keep reading below for a summary, and be aware that it includes a discussion of suicide and mental illness that may be disturbing or triggering to some readers. If it is, please contact Lifeline via phone on 13 11 14 for 24/7 support.

Together, let’s send a strong message to our Prime Minister this Mother’s Day and pray that his heart would be moved to chart a new course of action.

PS. The Australian Churches Refugee Taskforce has issued a call to prayer for the Mothers of those in offshore detention this Mothers' Day.

It has been a devastating couple of weeks in the asylum seeker space in Australia that have prompted us to produce this open letter video to coincide with Mother’s Day.

Just over a week ago, 23 year old Omid, a young man who fled Iran in fear of his life, asked Australia for help and, after being locked away for three years under abusive conditions of offshore detention, set himself alight. His last words were “this is how tired we are, this action will prove how exhausted we are. I cannot take it anymore”.

After lengthy delays getting treatment, he died of his burns. The delay and the relatively poor quality of medical care he received on Nauru have been implicated in his death.[1]

(This is not the first time a critically ill asylum seeker has faced delays in receiving medical care. In one previous incident, delays due to immigration officials without medical training taking many hours to respond to emails contributed to the death of 24 year old Hamid Khazaei from an infection.[2])

There are reports that within the same 24 hour period as Omid's self-immolation, five or six other asylum seekers on Nauru attempted suicide or serious self-harm. Two were arrested as a result of Nauru's recent decision to criminalise suicide attempts.[3]

Then, on Monday, a young woman called Hodan, also set herself alight, less than one week after she was forcibly removed by Border Force officers from the Brisbane Immigration Transit Accommodation and taken to Nauru[4]. Hodan is reported as being either 19 or 21 years of age and is recovering in hospital in Australia.[5]

In the aftermath, Immigration Minister Peter Dutton indicated that asylum seeker advocates in Australia were to blame for Omid and Hodan’s desperate acts[6], along with parts of the media[7].

Meanwhile, Australia's other offshore detention centre at Manus Island has been ruled illegal under PNG's constitution and the high court has ordered it to be closed.

And the Spanish parent company of Broadspectrum, which run the offshore detention centres has signalled it will be stepping away from continuing its multi-billion dollar involvement in the camps.[8]

Finally, the Government has paid a confidential compensation settlement to asylum seeker advocacy group ‘Save the Children,’ admitting that they wrongly accused them of trying to embarrass the former Abbott administration by encouraging asylum seekers at Nauru to harm themselves and conceding the allegations were baseless.[9]

Enough is enough, hey? Please share the open letter on social media or via email to say #BringThemHome