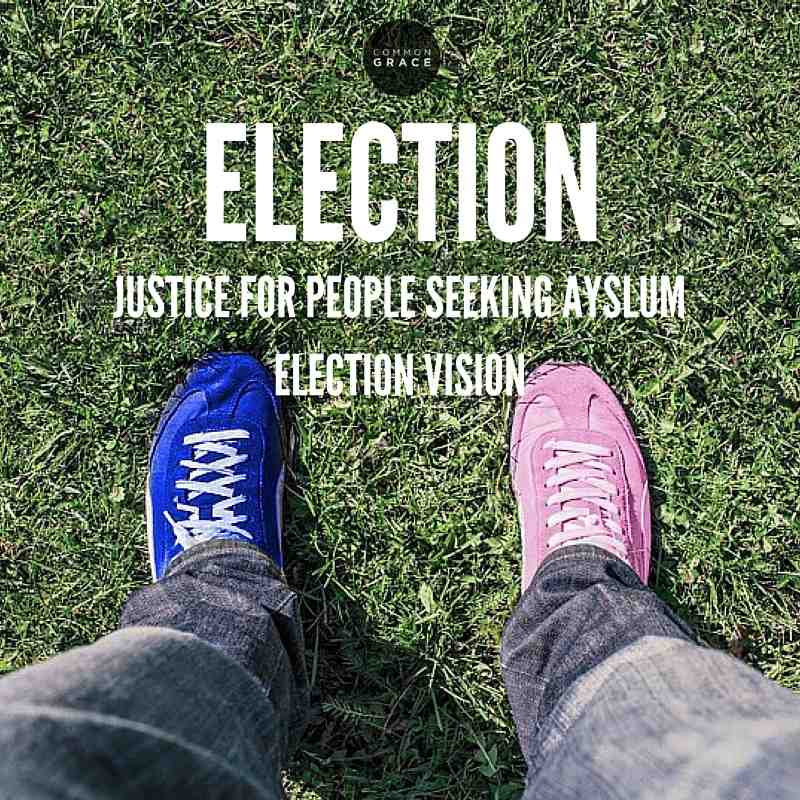 A new vision for Australia’s response to people seeking asylum

Fact #1: The Australian Government’s current response to people seeking asylum is one of ‘deterrence’.

Fact #2: The Australian Government’s own statistics show that the overwhelming majority of people who come to Australia seeking asylum are found to be genuine refugees and their applications are approved[1].

It actually gets worse - we’ve kept stepping it up over the years. We’ve gotten meaner and made it harder. We’ve done our absolute best to deter genuine people from seeking safety in Australia.

And yet they’ve still tried. Why?

Perhaps it is because, as Somali born refugee Warsan Shire’s poetic lines say,

no one leaves home unless

home is the mouth of a shark

However every day, when we turn on our TVs and sees millions of people fleeing their homelands in search of safety, it has become increasingly clear that our policy of ‘deterrence’ towards people seeking asylum is just not OK. It’s a ‘head in the sand’ and ‘fingers in our ears singing la la la’ response at best. It’s utterly inhumane at worst.

We have seen their faces. We have watched them grieve. We are haunted by an awareness that, if we had just been born in another country, that would be us, on someone else’s TV screens, fleeing our homelands.

We know that we can’t keep pretending that stopping people from arriving in our homeland, changes the reasons they have to leave theirs.

We don’t want to keep ‘turning back boats’ when we know those boats are filled with people who are just like us.

So we know it is time in Australia for us to carve out a new response to people who seek safety on our shores.

It is well and truly time for us, as a nation, to commit to finding new solutions that treat people who are forced to flee their homelands with compassion and respect.

To regain our international reputation as a country that upholds basic human rights and is generous in giving everyone a fair go, rather than having to cringing in embarrassment at our human rights abuses. To give up this nonsense of ‘deterrence’ and simply be good, and kind and decent, like the average Aussie is.

As Christians, we are steeped in a rich biblical heritage that instructs us to welcome the ‘stranger’ and show ‘hospitality’ to foreigners. We have a deep theological well to draw from, as we call on our nation’s leaders to chart a new course. We know that loving our neighbour is powerful and transforming. We believe that every human is valuable and made in the image of God.

So it is us, as Christians, whose voices should cry out the loudest, and speak a new vision for how Australia responds to people seeking asylum on our shores.

How do we bring change?

At this stage people often start to ask "But how? And what? We can’t just open up the borders and let anyone who wants to come in! It isn’t safe!"

Do you know that hardly anyone in the asylum seeker and refugee advocacy space believes that 'open borders' is a good idea? Even the Greens party does not have a policy of 'open borders'. It is a phrase that you really only hear mentioned by people who are trying to defend a policy of deterrence.

The phrase ‘open borders’ is political rhetoric designed to convince Australian voters that “deterrence is the only way” by making it seem like that the choice is between “open borders” and the harsh policies of deterrence we currently have. It’s a false dichotomy to serve a political purpose. Do we really have to treat people harshly in the hope of deterring them coming to us for safety? Is that the only way to look after Australia? Of course not.

At the moment, our politicians do not seem to think that their asylum seeker policies will win or lose them an election. And, of course, they are politicians who are elected to represent the majority of their constituents.

This presents us with a great opportunity - allowing them to do their job by us speaking up as constituents! Imagine what would happen if every Christian contacted their local members this week to advocate for people seeking asylum. Our leaders would quickly realise that a large group of Australian voters are serious about responding to the vulnerable with compassion and generosity and our advocacy would make a way for them to propose new policies of compassion and generosity within their parties!


Where do we start?

Here are some specific policy suggestions you can explore:

1. Let’s start by increasing our humanitarian intake - As global citizens in a hurting world, Australia is currently not doing its fair share, with our current intake of refugees ranking us internationally at 50th overall, 67th on a per capita basis and 84th relative to GDP.[3]  Increasing our overall intake not only promotes the value of generosity, it allows us to accept our responsibility as global citizens, in line with the solemn promises we made as a nation to the world.[4]

2. Let’s make safe ways for people to journey - "Turning back the boats" is a cheap slogan that actually does nothing to 'save lives' as these people are still left without safety, and therefore still left needing to undertake other dangerous journeys in search of protection. If we were truly motivated to stop people drowning at sea, we would offer rescue services, not navy blockades. Let’s provide safe ways for people to journey, and actually protect them from those who might attempt to exploit them with offers of unsafe options.

3. Let’s provide safe and efficient processing right here in Australia - It goes without saying that Australia needs to end offshore processing as a measure of deterrence, as it has been consistently been reported (from many different types of sources) to be a very unsafe environment, and is both physically and psychologically damaging to people seeking asylum.[6] In Australia, we can provide efficient, safe processing options that we can be proud of, by ensuring all people are treated with the dignity and respect.

4. Let’s be kind to our neighbours - Moving forward, there’s no need why we should continue our current ban on the resettlement of UNHCR refugees processed in Indonesia.

Furthermore, we can and should shoulder the responsibility of leading a regional response to people seeking asylum. We’d love to see Australia bring together other regional leaders, including Indigenous leaders, to find new solutions. Together, through truthful conversations, we believe regional leaders can find practical outcomes that work for the whole region (rather than for Australia alone).

In regional response like this, we’d love to see Australia willing to use its financial resources generously to enable the whole region to care best for people who seek asylum. Imagine how generous we could be if we directed the funds that we currently use in bilateral arrangements (that exploit the poorest countries in the region by providing financial incentives for them to take on Australia’s global responsibility in resettlement and processing), to regional solutions! [7]

5. We know we’ve got to process people’s applications, so let’s do it well!

- Processing – One of the ways that Australia currently tries to deter people from seeking safety in Australia is with prolonged processing times. The average person spends 454 days in detention[8] and they are not given adequate access to legal assistance[9]. Both of these must be addressed for justice to thrive. Let’s overhaul these systems until we have fast, fair, efficient processing, and let's provide people with the legal help they need along the way to ensure that we aren't sending anyone back to danger.

- Visas – Our current system of visas likewise seeks to deter people who come to Australia in search of asylum, with various restrictions in the length of time they are valid for, as well as obstacles that keep people in limbo (like not allowing them to work and support themselves, and restricting their access to services). To read about the specific visas and their restrictions, see Searching for Freedom: Refugee Week 2016 produced by Uniting Justice. We’d love to see our Government and community leaders sitting down with people seeking asylum, refugees, advocates and service care providers, and coming up with a new set of visas that are designed to allow new Australians to really flourish.

- Public Briefing - As a matter of policy, our government leaders should brief the Australian public via the media when people seeking asylum arrive in Australia[10] and when individual cases arise with specific cause for concern. At present, neither of these happen and, as we all know, accountability and transparency are important policies that we must protect, as they guard against corruption and the exploitation of minority groups.

- Legal protections for media, advocates, care givers and service providers  - Our current government has passed measures that not only prevent media, advocates, caregivers and service providers from reporting what they know to the media, but that also puts them at risk of legal prosecution and jail time if they do. In an honest, democratic society, such measures are absolutely unnecessary. Furthermore, they create an environment where corruption can flourish, so really need to be avoided. We support legal protections that allow these Australians to act in accordance with their consciences.

- Language - The shameful truth is that, for many years, Australia’s public discourse has been dominated by language that promotes fear in Australian citizens and demonises people seeking asylum - a group of people who statistics show are in a genuinely desperate situation. Demonising language may get votes, but as Christians, we really need to say ‘Enough!’ on this one.

It’s simply not OK for anyone - especially our land’s elected representatives - to throw real humans under the proverbial bus by using language that is designed to make Australians afraid of them! Together, let's call foul every time our leaders use dehumanising and incorrect terms like 'illegals,' 'boat people' and 'queue jumpers'[11], and ask them to replace them with terms that humanise like 'people seeking asylum' and 'people seeking safety'. As Christians who know that all humans are made in the image of God and have inherent value, we should champion this standard more than anyone!

Similarly, terms that are to do with defence, like 'border protection' should not be conflated with policies that deal with people seeking asylum. Let’s encourage our leaders to save the scary war terms for actual wars and instead speak with compassion when our fellow humans ask us for help, hey? Let’s be generous and compassionate - even in our language!

Read more about each party's policies on asylum seekers and refugees:

[5] Shelter from the Storm A Uniting Church in Australia Statement on Asylum Seeker & Refugee Policy Adopted by the Fourteenth Assembly July 2015 Resolution 15.23.09, pg 37.

[9] Q & A on Access to Legal Advice on Nauru by the Law Council Australia.

[10] Shelter from the Storm A Uniting Church in Australia Statement on Asylum Seeker & Refugee Policy Adopted by the Fourteenth Assembly July 2015 Resolution 15.23.09, pg 37.