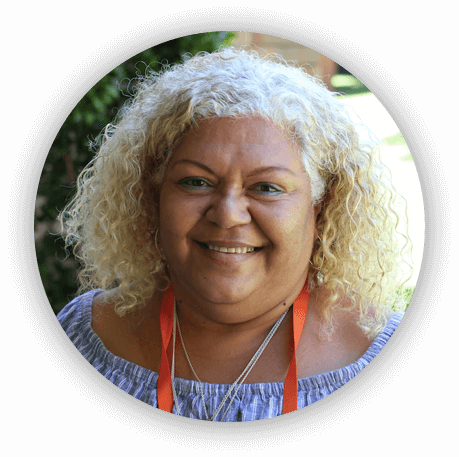 Aunty Sharon Minniecon is an Ugar (Stephen Island) woman. She was born in Ayr in North Queensland. Her grandmother was from Stephen Island in the Torres Strait. She is one of 13, and counts herself as a fifth generation Christian. Her three children comprise the sixth generation.

Aunty Sharon married Ray Minniecon, who became an ordained pastor within the Aboriginal Evangelical Fellowship. They have supported each other in a wide range of ministries over the last 42 years. The places they have worked include La Perouse, SW Western Australia, Redfern and Glebe. Most of the time Aunty Sharon has worked in Aboriginal health and education and pastoral work. She currently works with St John’s Glebe as a community worker and pastor in its emergency relief program.

Bare facts say little of the inspiration that Aunty Sharon is and has been to so many. With Ray, over many years, she has listened to and helped children of the stolen generation, most recently through the ‘Journey of Learning Through Loss, Grief and Trauma’ within Anglican Deaconess Ministries.

For 12 years she has helped shape and promote the Gawura School for Indigenous children within St Andrew’ Cathedral School, and has helped children find an educational home there.

Aunty Sharon has modelled the heart of Reconciliation in many ways, including after she and Ray lost their job and accommodation when the Anglican Church closed down Crossroads at Redfern. Despite those hurts she and Ray have made their new home at St John’s, Glebe, where they have established and run Scarred Tree ministries, a church within a church, that supports and provides a focus for worship for Aboriginal and Torres Strait Islander peoples within Glebe. From there she consults widely with local community groups, giving her unique perspective on the needs of her people. 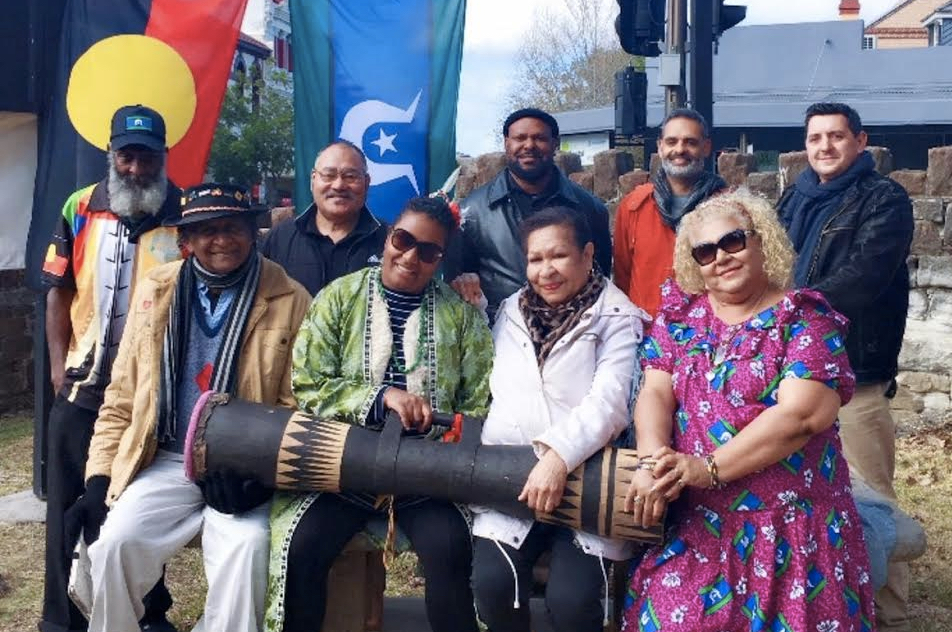 Aunty Sharon Minniecon with family and some of the Aboriginal & Torres Strait Islander members at St John's Glebe.

Because of Aunty Sharon, several generations of Aboriginal and Torres Strait Islander peoples have felt the love of Jesus. They have been heard, comforted, healed, educated and supported in many practical ways. She has inspired many Aboriginal and Torres Strait Islander peoples to take action and make a difference, and she has inspired the love and admiration of many non-Aboriginal people, including me.

The word most people use of Aunty Sharon is ‘amazing’, but she would waive that praise away and get on with her next project.

This post is the seventh in our NAIDOC Week series "Because of her, we can!" celebrating Aboriginal Christian women who have shaped our lives, our churches and our nation. NAIDOC Week Artwork by Cheryl Moggs. 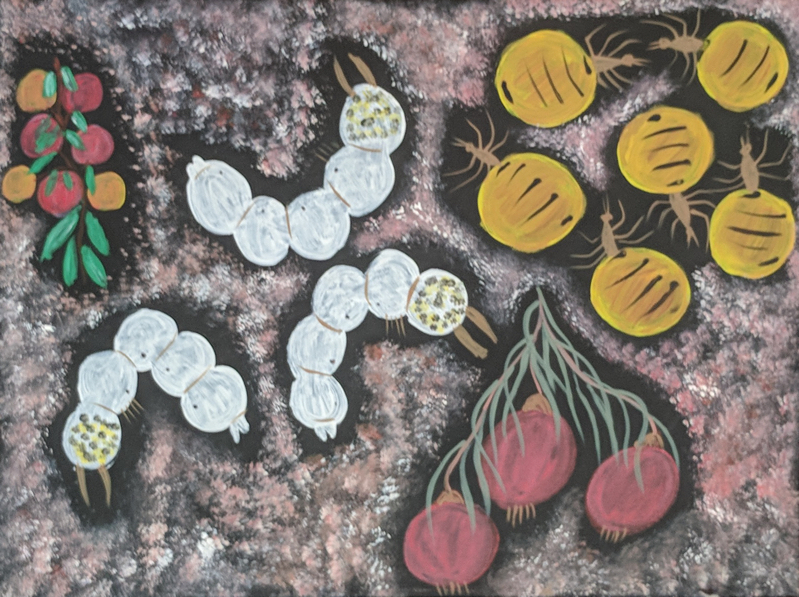 Throughout this week we are sharing artworks from Aboriginal and Torres Strait Islander artists who are part of The Grasstree Gathering network. These artworks are being shared with permission of the artists, and are not to be copied or reproduced. They are currently on display at The Grasstree Gathering Art Exhibition at Newtown Mission in Sydney, available for public viewing this coming weekend. If you would like to purchase an artwork from the artist please email [email protected]. 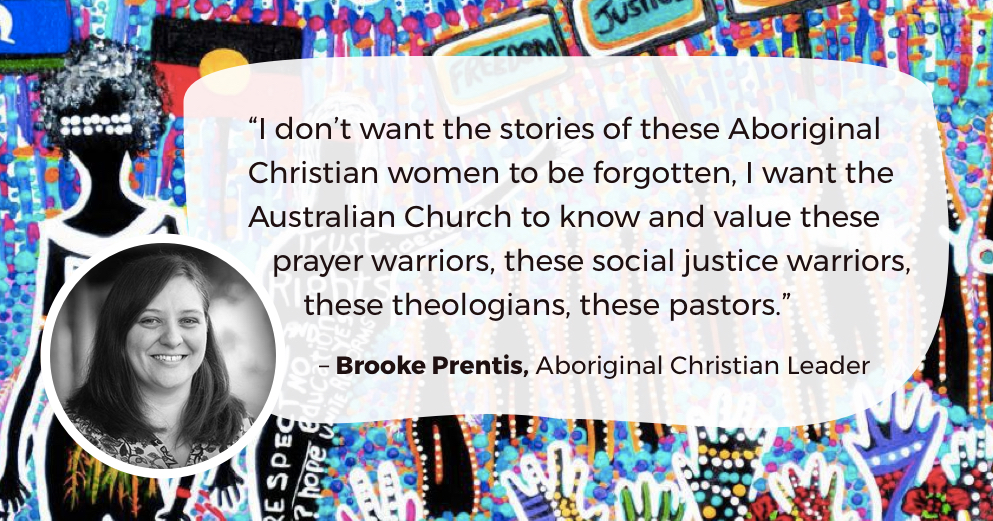 Brooke Prentis launches our NAIDOC Week Series, "Because of her, we can!" with a powerful reflection on the women who have shaped her life, and the opportunity for us all this NAIDOC Week. 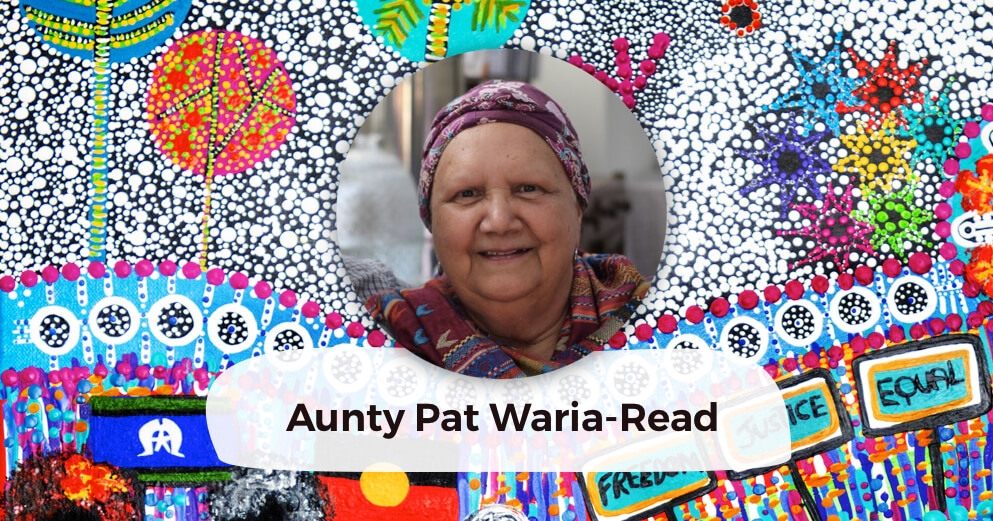 Because of Aunty Pat Waria-Read, we can!

Sharon Varcoe, a Narungga women from South Australia, celebrates the life and ministry of Aunty Pat Waria-Read who has encouraged and supported her as a spiritual mother and mentor. 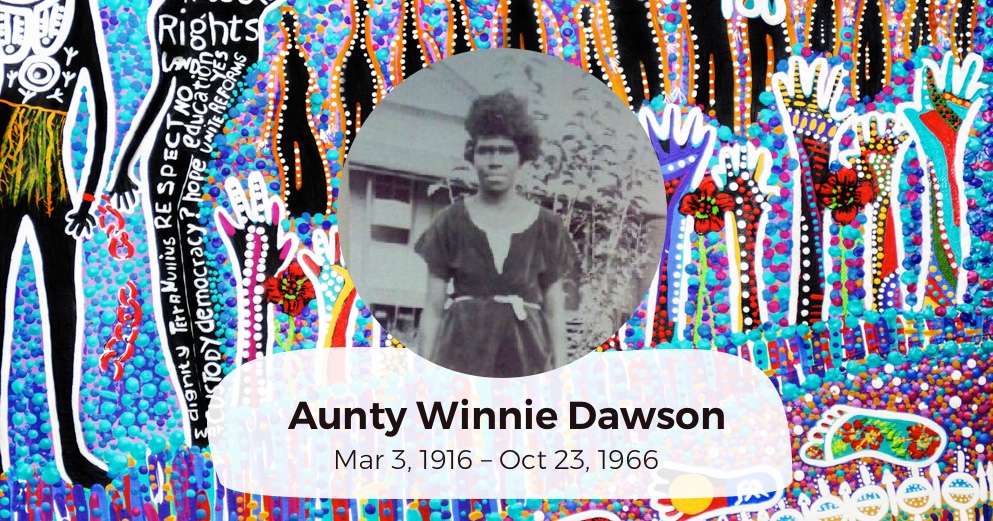 Because of Aunty Winnie Dawson, we can!

Sono Leone honours her grandmother Aunty Winnie Dawson who faithfully loved her family through all circumstances and became a determined advocate for justice in her time. 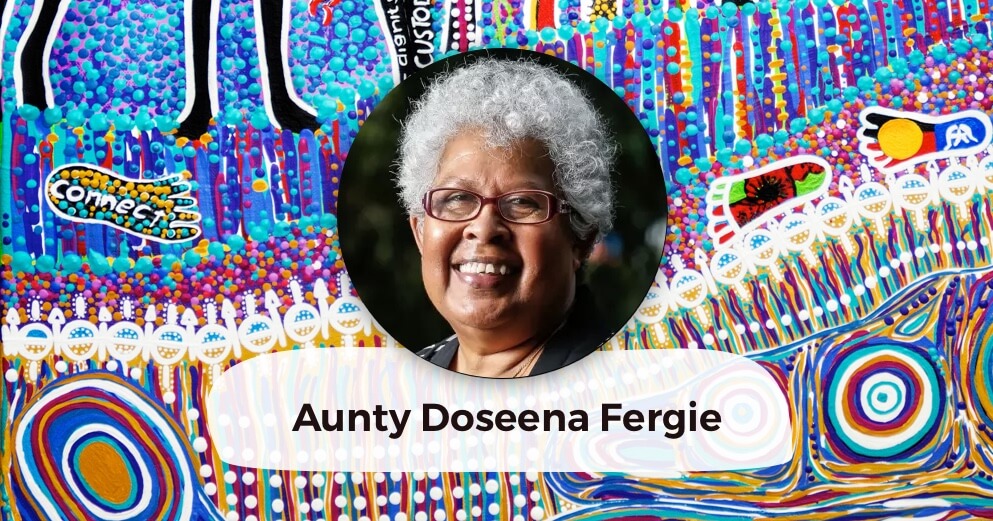 Because of Aunty Doseena Fergie, we can!

Safina Stewart celebrates the impact her mother Aunty Doseena Fergie has had on countless lives, as she continues to educate, inspire, advocate, lead, love and support people throughout the world. 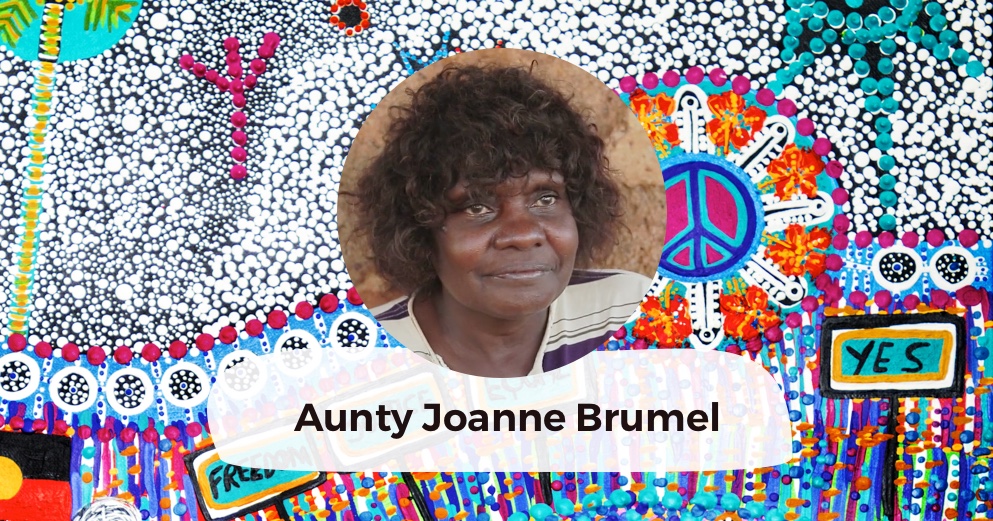 Because of Aunty Joanne Brumel, we can!

Rachel Borneman honours her aunty through the skin system, Aunty Joanne Brumel, and celebrates her determination, her love for her family, her commitment to education, her leadership and support of the next generation, and her example of faithfulness amidst pain and difficulty. 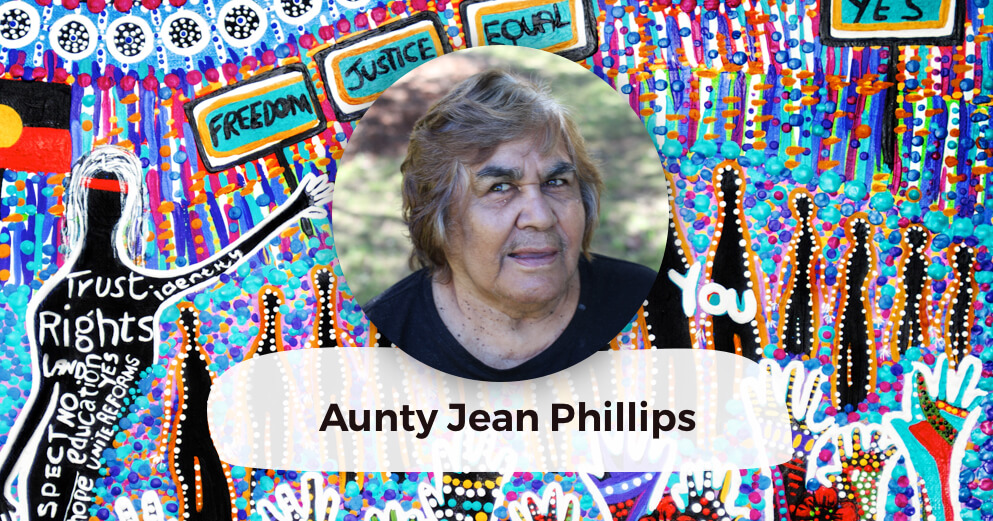 Because of Aunty Jean Phillips, we can!

Brooke Prentis interviews Aunty Jean Phillips about the Aboriginal women who have shaped her life, her ministries empowering the next generation of Aboriginal Christian leaders, and her vision to see the Australian Church partnering with Aboriginal ministries in the healing of this land. 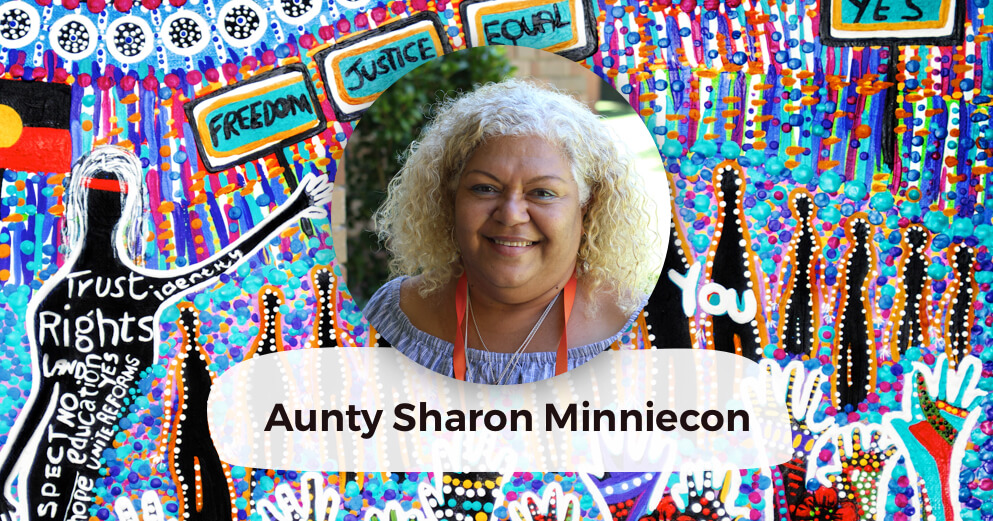 Because of Aunty Sharon Minniecon, we can!

Rev Mark Wormell celebrates Aunty Sharon Minniecon's 42 years of faithful Christian ministry across this country, and her continuning service to faithfully love and serve God, her people, and the wider church. 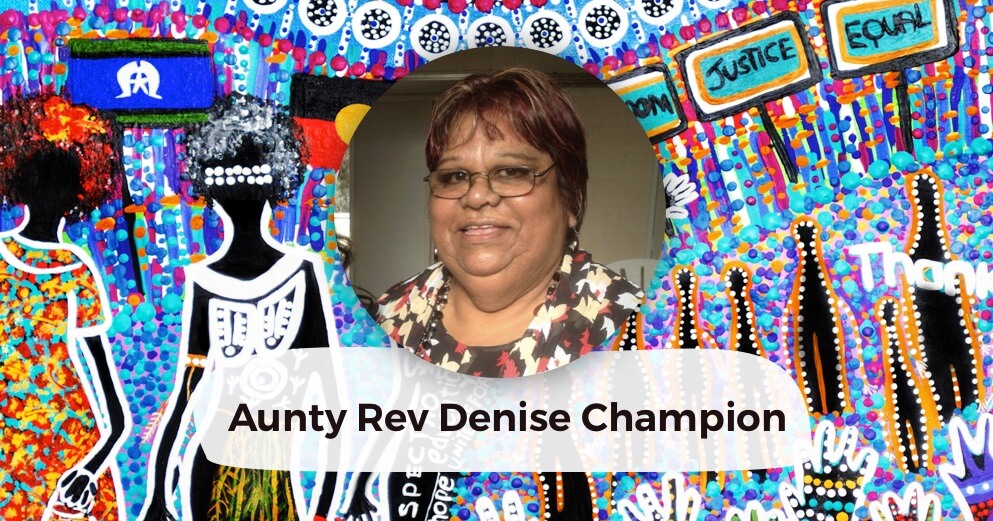 Because of Aunty Rev Denise Champion, we can!