Give Australia solar panels for Christmas

UPDATE: You have given enough money to purchase a full kit of 12 state of the art solar panels with a contribution to installation. Amazing! Thank you!

As Christians, we long to see a flourishing world, but our chance to pass on a clean energy future to our children is quickly slipping away.

Our government has been trying to decrease the modest Renewable Energy Target (RET) that’s been in place since the Howard era, resulting in a staggering 70% drop in investment into Australian renewables this year [1].Without a strong Target our reliance on fossil fuels keeps on increasing and the future of renewable energy is uncertain.

But Australians aren’t uncertain about the future. Nearly 90% of Australians support the RET [2] – so it’s clear, Aussies love renewables like John the Baptist loved locusts. Just recently the government has indicated they want to restart negotiations on the RET and are willing to budge on their initial stance [3], giving Christians an opportunity to do something practical to influence the final decision before it’s too late.

So right now is the time for Christians to add their voice to the broad chorus already calling for a strong renewables industry. People from all backgrounds, states and political affiliations support renewables, and with more than half of the current cabinet identifying as followers of Christ, our voices will add extra encouragement as the RET comes back on the table.

Already 1 in 5 Australian houses use solar energy[4]. But what about the most visible house in the nation? Let’s crowd fund solar panels for Kirribilli House as a Christmas gift for the nation. The panels will be delivered to the current occupant, Prime Minister Abbott, on behalf of the nation by a diverse bunch of local church leaders as a gift to symbolise public support for a clean energy future.

It’s no secret Prime Minister Abbott hasn’t been on his best behaviour when it comes to protecting the earth. Even Pope Francis sent him a not so subtle personal letter ahead of the G20 imploring him to address our ecological crisis [5].But with your help, the PM won’t get coal from Santa this Christmas - he’ll get solar panels from priests, and local residents joyfully singing Christmas carols.

We have one week to crowd fund these solar panels to give us a shot at influencing the future of Australian renewables. Chip in now and together, let’s send the message to the PM: don’t knock renewables until you’ve tried them.

$3000 will purchase 6 solar panels and contribute to installation

$4500 will purchase 9 solar panels and contribute to installation

$6000 will purchase 12 solar panels and contribute to installation

We can’t do this it without you – can you help make this happen?

[5] “Letter of his Holiness Pope Francis to the Prime Minister of Australia on the occasion of the G20 Summit”, The Vatican, 6 November 2014.

What will we do if the gift is not accepted?

If the PM and the independent Trust that looks after Kirribilli House do not accept our Christmas gift, we will offer the solar panels to the Davidson Brigade of the Rural Fire Service, where Mr Abbott has served for many years. Fire fighters are on the front line of climate change fighting increasingly frequent and intense bushfires. It’d be a small way we can say thank you for what they do.

Why should Christians care?

We are overheating God’s good world. Today, climate justice is an inescapable part of Christian discipleship in Australia. It’s about loving God and our neighbours as climate change hits the poorest and most vulnerable first and hardest. Click here to read more. 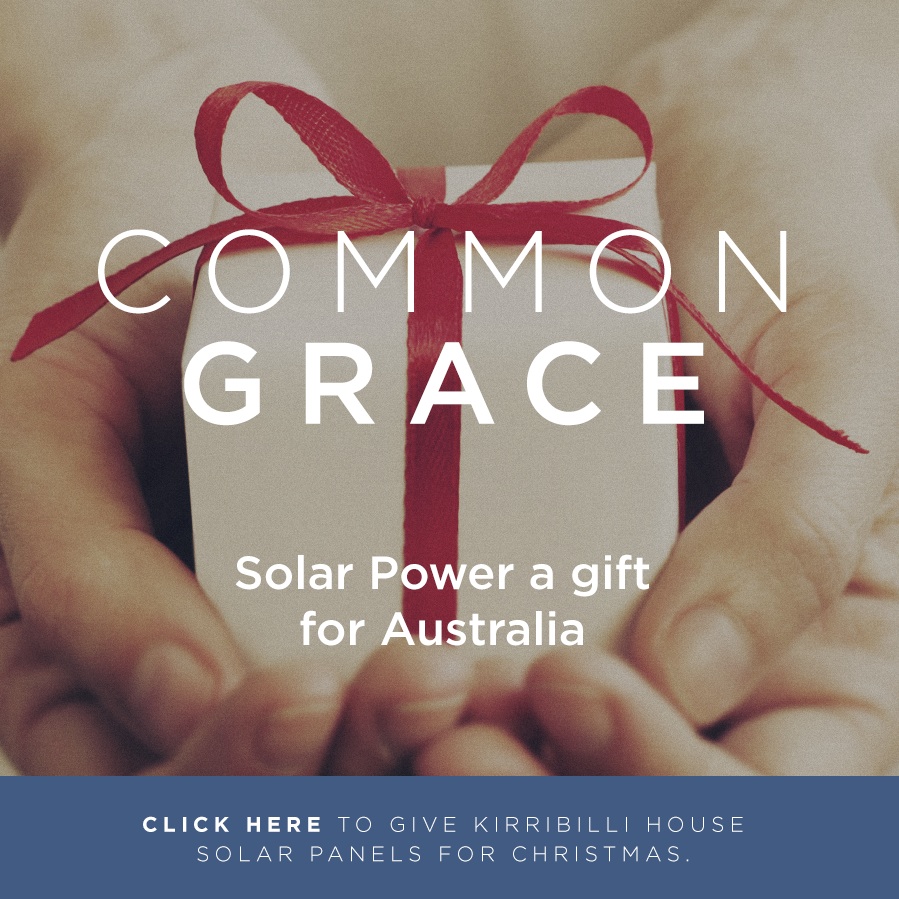