Walking this land as an Aboriginal person is hard. This year has been hard.

Walking into the face of injustice, each and every day, is hard – hard because it often seems so lonely, overwhelming, feeling like things can never change because the whole system thrives, benefits, and profits from the continual injustice. Continually asking Non-Indigenous Christians to come and walk alongside is hard – hard because there are few that accept. There are those that do bring you joy, but there are still too many that are scared, disinterested, have other priorities, or are just racist. But we must walk on – driven by a Creator who has walked alongside peoples in these lands now called Australia, for over 65,000 years.

I’ve said many times it’s a long journey, both the steps we have already taken but the hundreds, thousands, millions of steps we still need to take, individually, communally, and nationally. We must walk on.

Often I wish we would run. Running would make the journey so much quicker. Sometimes I feel like running – running from the pain and hurt of injustice, running from those that refuse to listen and learn, running across the land Creator God gave us to take care of.

I said in my NAIDOC 2017 message that I love trivia. I was the Quiz Master at a Grasstree Gathering fundraiser held recently at St Andrew’s Anglican Church in South Brisbane. One of my favourite rounds is the Movies round (as well as History and Sport). One of the questions that I didn’t ask (but wish I had) was: How long did Forrest Gump run for in the 1994 movie Forrest Gump? The answer: 1,169 days or, as Forrest puts it, “3 years, 2 months, 14 days, and 16 hours”.

Forrest covers an estimated 30,616 kilometres on his run across the USA. Numerous news reporters ask him what he is running for, making suggestions of “World peace”, “the homeless”, “Women’s rights”, “the environment”, or “for animals”. And yet Forrest’s response is simply, “I just felt like running!”. But Forrest continues, “For some reason what I was doing seemed to make sense to people. Some people said it gave people hope.” For me, the next response Forrest gives is a sad one when he says about hope: “But, I don’t know anything about that.”

Forrest Gump’s story is a remarkable one, even though it is fictional. I remember often wishing it had been true. Well, do you know in Australia, this year, we’ve had a true story similar to Forrest’s?

Aboriginal leader Clinton Pryor has just walked (not run) from coast to coast, from the Indian Ocean to the Pacific Ocean. Clinton started at Heirisson Island in Western Australia, where he had spent the prior 16 months living in protest against the forced closure of remote Aboriginal communities and homelessness. Clinton left Heirisson Island on 8 September 2016 and arrived in Canberra 361 days later, before returning home on 8 September 2017, exactly one year to the day he left. 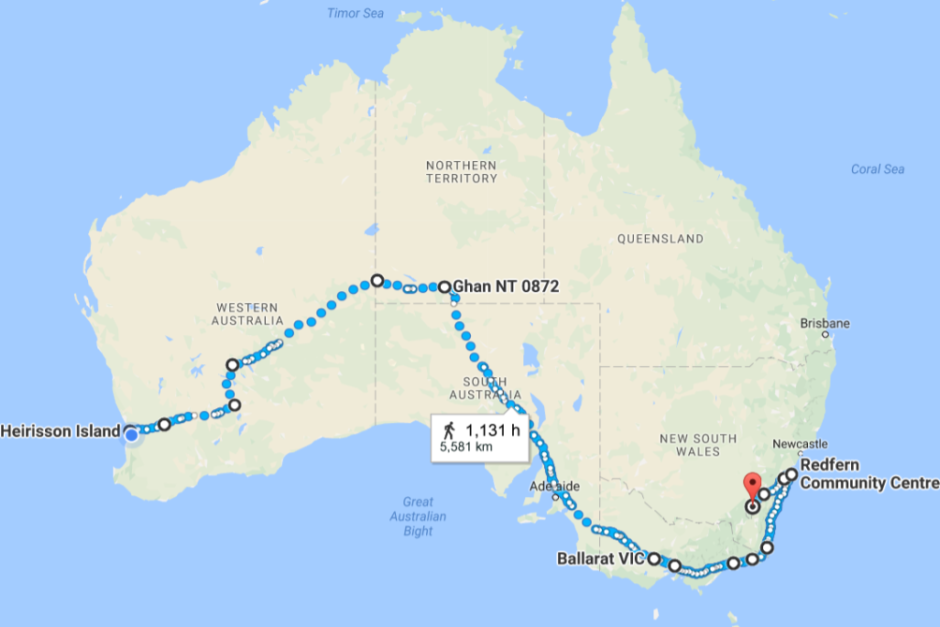 You may ask, what has Clinton been walking for?

Clinton has been walking for peace, peace in Australia, through requests for Treaty and acknowledgement of our Sovereignty. #TreatyNow

Clinton has been walking for the homeless through the re-establishment of forcibly closed communities. #SOSBlakAustralia

Clinton has been walking for Women’s rights through an investigation into family services to put an end to the ongoing stolen generations. #NewStolenGeneration

Clinton has been walking as a First Nations man, the God-given role of caretaker of this land, as a Wajuk, Balardung, Kija, and Yulparitja man, and so therefore has of course been walking for the environment and the animals, for all the lands and waters, and through his request for the Heritage Act to be demolished and replaced with a moratorium placed on all mining leases covering existing and previously deregistered sites. 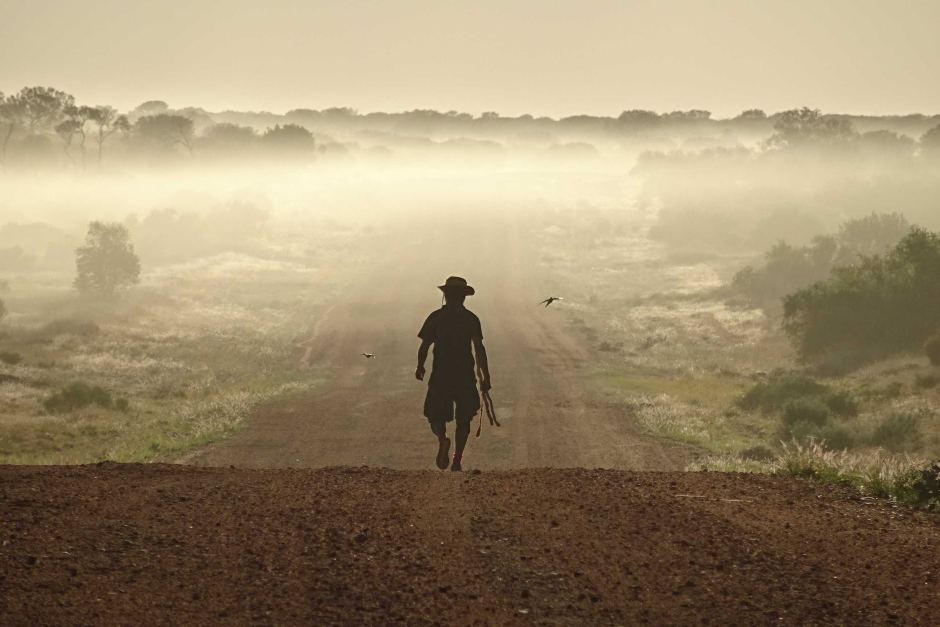 Clinton says he and his message were shaped by the steps he took. 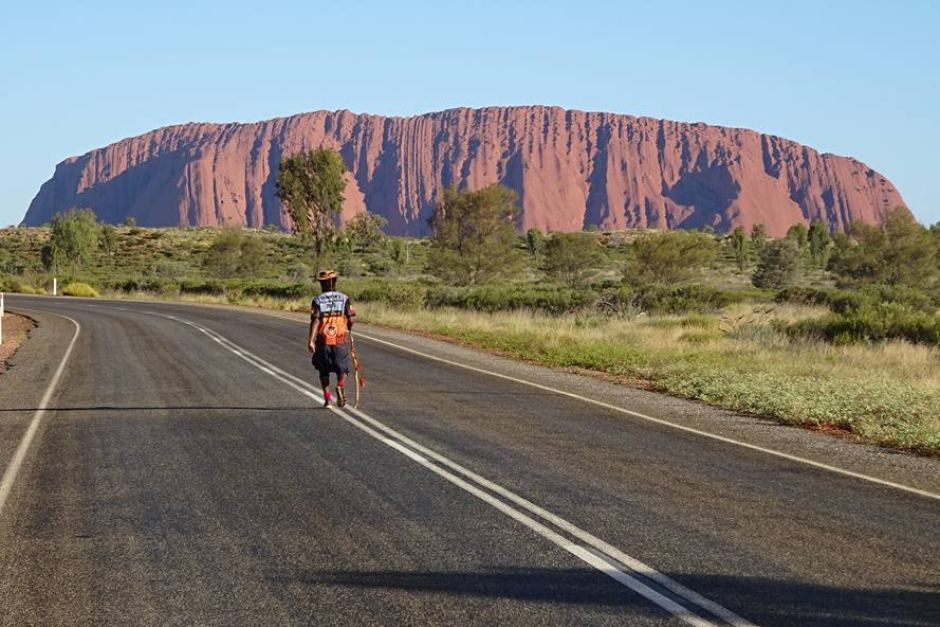 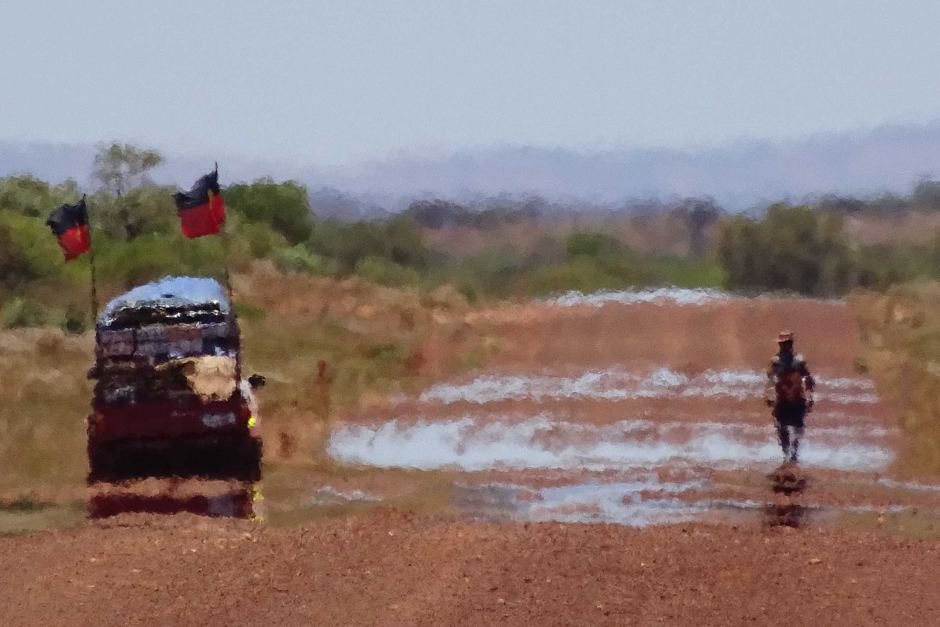 Clinton's spent 16 days in the desert, an experience that almost broke him. 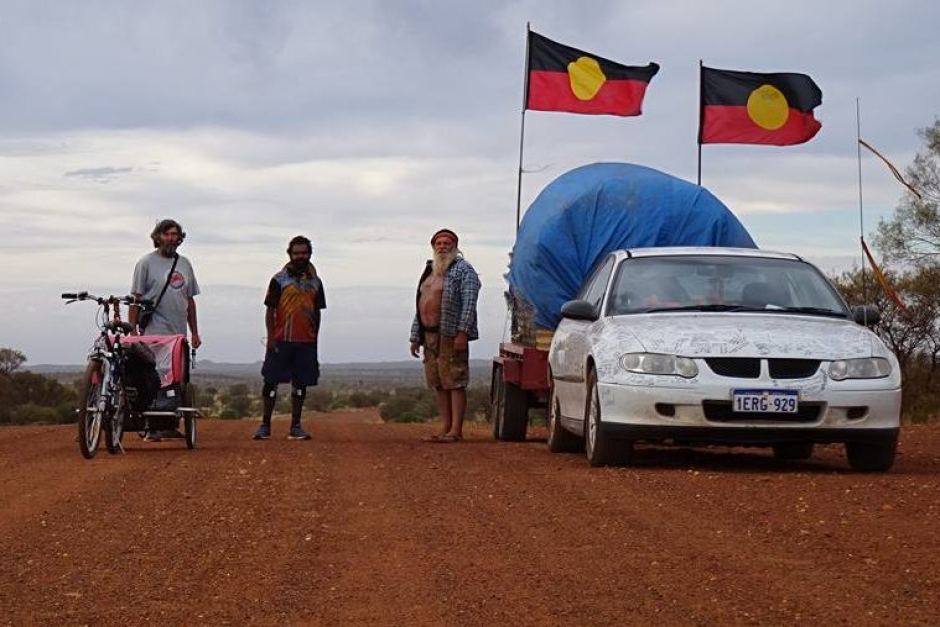 In Kalgoorlie Clinton saw the pain of his people over the death of Elijah Doughty. 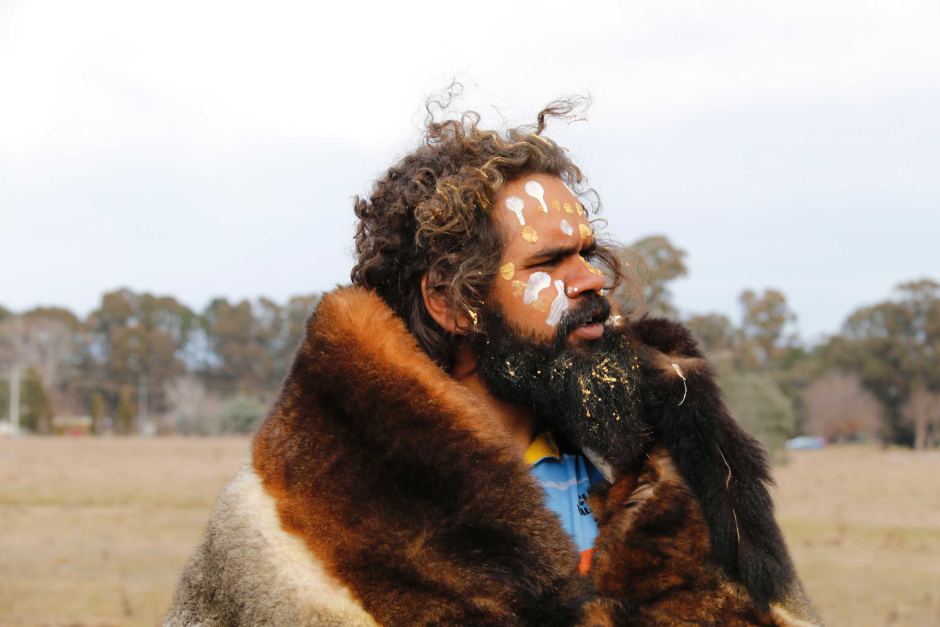 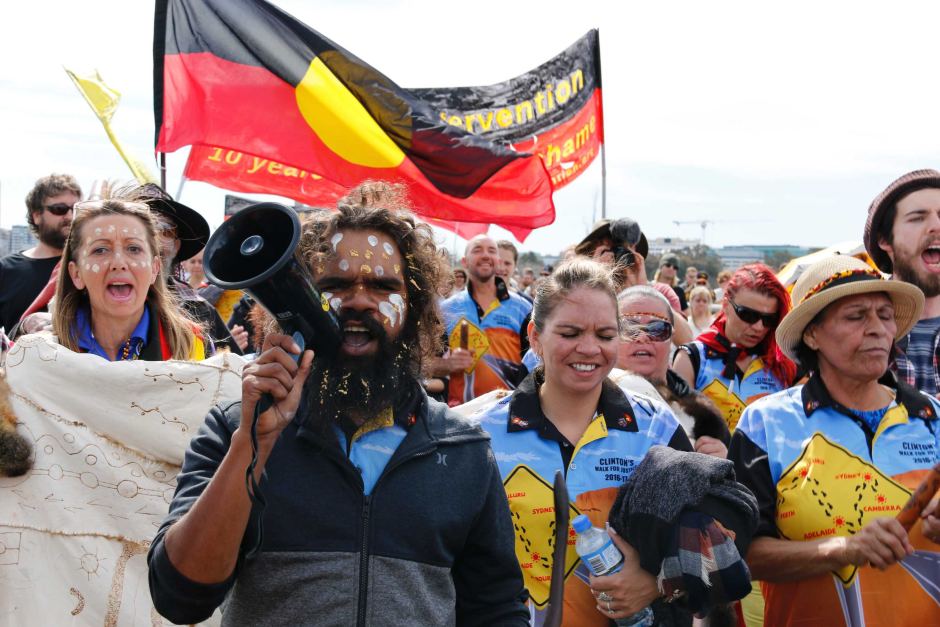 Clinton's message evolved throughout his year-long journey as he gathered with people along the way. (ABC News: Jake Evans) 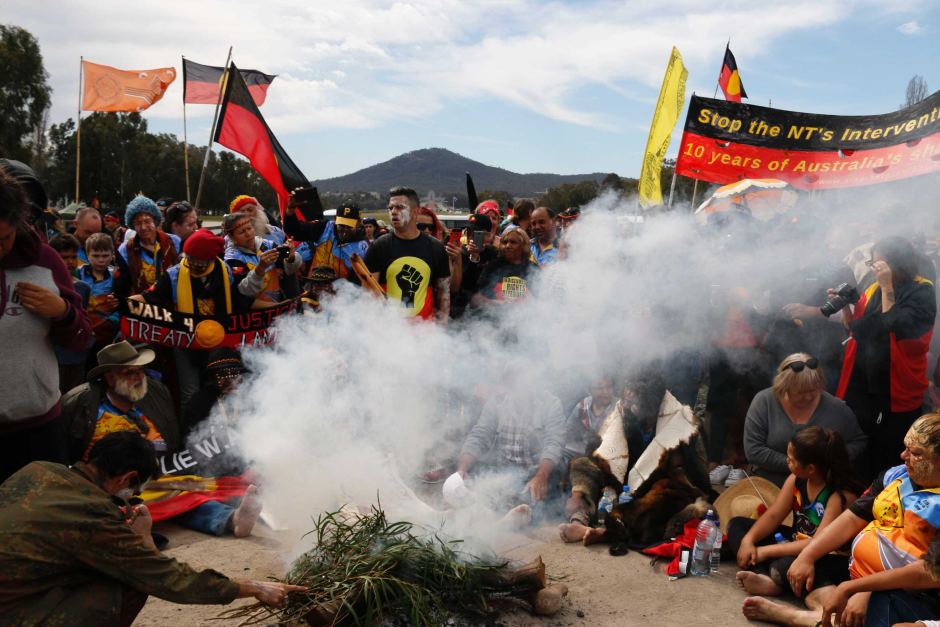 A smoking ceremony at the Aboriginal Tent Embassy welcomed Clinton on his arrival to Canberra. (ABC News: Jake Evans)

But not only has he walked, he has listened.

Clinton has called to implement all the recommendations of the 1991 Royal Commission into Deaths in Custody, just like I have through Common Grace. The Royal Commission began looking at Aboriginal Deaths in Custody in 1980, the year I was born, and still our people are dying in prison, being denied medical attention, being denied protection. Just this week we grieved 12 months since the death in custody of Wayne Fella Morrison. Wayne was my cousin sista Latoya’s brother, and as Clinton went through Adelaide he spent time with Latoya. Their family still waits for answers. #JusticeForFella

Close to the start of his walk, Clinton attended the funeral of Elijah Doughty in Kalgoorlie. The funeral of a 14 year old boy run over by a man in a car. Clinton described this as one of his hardest days, saying: “I have seen so much hurt and pain in my people's eyes today at the funeral. The pain of no justice for young Elijah.” #JusticeForElijah

Elijah’s story has broken my heart too. On 21 July, nearly 12 months after Elijah’s death, a sentence was handed down which I will never ever understand. I had thought this time would be different. But it wasn’t. The injustice for Elijah made me physically sick, sick in my stomach. Once again I have seen the justice system fail. Once again I have seen the justice system say, Black Lives Don’t Matter. It was so hard, I put off writing to you. Then we lost two of our great Elders in Uncle Yami Lester and Uncle Stevie Goldsmith. Then the nation mourned briefly for the passing of Dr G. As I said in my NAIDOC 2017 sermon, “Our reality is one where celebration is entered into with caution, for the reality of our Australia in 2017 is waiting for us on the other side of NAIDOC”. Little did I know that reality would be so painful. The pain was nearly too much to bear. Many of you helped me. Thank you for those that have felt the hardness, have given words of encouragement, and attended rallies for Elijah – to know you have felt the pain too has lessened the loneliness and strengthened the hope. We cannot afford to be scared or protect ourselves from the pain. Clinton’s walk also spurred me on. Clinton’s walk gave us hope.

Unlike Forrest, Clinton understands hope, because he understands pain. Clinton knows there is another way for our country to live, one where Black Lives Do Matter.

#ClintonsWalkForJustice reminded me of this Bible passage:

“Do you not know? Have you not heard? The Lord is the everlasting God, the Creator of the ends of the earth. He will not grow tired or weary, and his understanding no one can fathom. He gives strength to the weary and increases the power of the weak. Even youths grow tired and weary, and young men stumble and fall; but those who hope in the Lord will renew their strength. They will soar on wings like eagles; they will run and not grow weary, they will walk and not be faint.”

And so…we must walk on.

Whilst Clinton’s walk seems to have reached an end, the journey has only just begun. Clinton knows there are many more millions of steps to walk. My prayer is for you to see that, you and I, we must walk on. This is a shared journey.

Clinton asked the Prime Minister to walk 60 steps to meet with him on his ground, and talk about the concerns he was bringing. The Prime Minister refused to walk, so Clinton had to go to him. A mere 60 steps. Let us see past our own comfort zones and make sure we not only walk the 60 steps but the 7 million steps, actually let’s not kid ourselves, the lifetime of steps, that is needed to bring about justice for Aboriginal peoples.

My prayer is that the next season is not just about joining hands as friends but linking arms and helping each other to walk on and take action.

Walk on by taking the pledge to Change the Record on Aboriginal incarceration and deaths in custody.

Walk on by listening, learning, and sharing about Clinton’s walk.

Walk on by standing with us in the calls of Elders from across these lands now called Australia.

We must walk on.

Brooke Prentis is the Aboriginal spokesperson for Common Grace. She is a descendant of the Waka Waka people, an activist for Aboriginal and Torres Strait Islander rights, a Christian pastor, and an accountant. Photos used are from ABC's @jcobevans and the Clinton's Walk for Justice team.