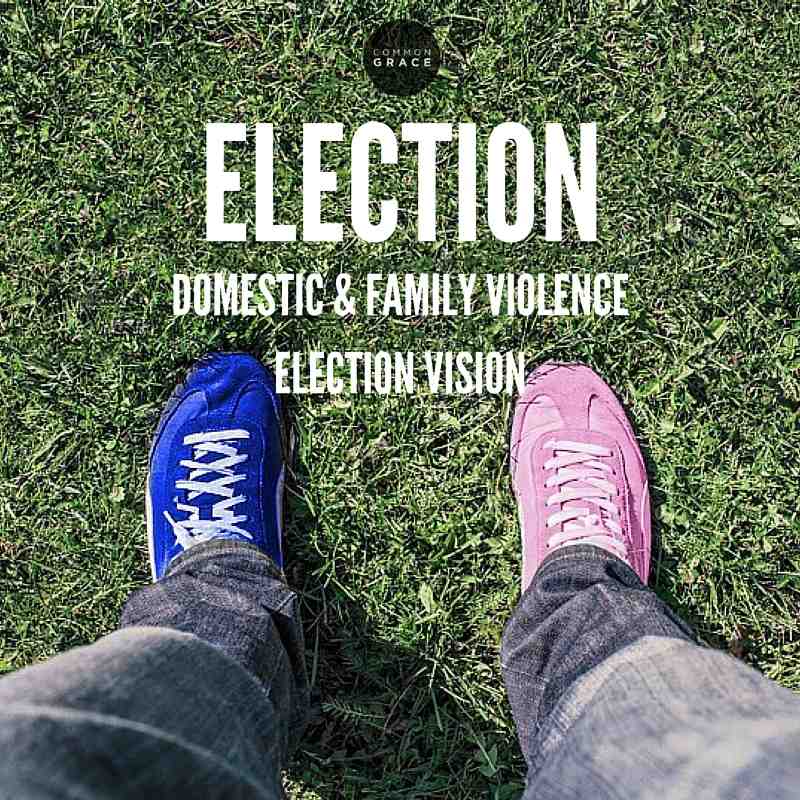 The Domestic & Family Violence Team brings you their vision for the church & Australia and their practical policy hopes in the face of the upcoming Election.

The statistics are now well known: a woman is murdered at least every week, another hospitalised every three hours. Around one in four women have experienced violence by an intimate partner, from someone who claims to love them. It isn’t polite dinner party conversation. It’s deeply disturbing.

But after decades of inaction on this national epidemic, momentum is now building for action. The recent Victorian Royal Commission into Family Violence has laid bare for all of us the true extent of the problem. And as we have seen in the case of institutionalised child sexual abuse, community awareness and understanding are half the battle.

“Will not God bring about justice for his chosen ones, who cry out to him day and night?” (Luke 18:7)

The vision Jesus gives us is of a community where the vulnerable are protected, the oppressed are set free, the wounded are healed, and the powerful serve. Kindness, justice and love should rule instead of fear. This isn’t merely a vision, it’s a commission given to every church, and every Christian.

That’s why we believe that the church should be a haven from family violence, where victims are believed and perpetrators held accountable.  A church should never be a place where a woman ever feels spiritually obliged to accept abuse.

The Victorian Royal Commission report sets out several specific recommendations for religious bodies and noted that churches have a “vital opportunity” to reach people affected by family violence. We agree and want to see Christian leaders and communities become better able to wisely respond to victims and abusers. Common Grace wants faith communities to receive best-practice advice from experts on what helps victims be safe and recover, and what perpetrators need to address their abusive behaviour.

By getting real about this issue, and looking at what attitudes and practices act as deterrents for properly reporting and dealing with family violence, it’s possible that Australian churches can become national leaders in lasting culture change.  Churches should be the first to name abuse as abuse, to challenge unequal gender roles, and repent of victim-blaming, and the male entitlement and privilege that allows this kind of violence to thrive.  Jesus always protected women.  Let’s do better.

Our vision for Australia

But our vision at Common Grace is actually bigger than the Church.  It’s for the whole of our nation.

We long to see greater equality in all intimate relationships and a major drop in the numbers of people being abused and controlled in the home and fewer children affected by violence.  We know that the path to family violence is complex, and that the way back to safety is also complex, requiring a dedicated team of professionals and a network of systems that actually work together to help pave the way. We believe all victims should be able to receive the help they need to deal with trauma and move towards recovery. We believe that perpetrators should always be held accountable for their violence and also be able to access behaviour change programs to turn their lives around.

When women do leave their partners, they’re jumping into a safety net that’s full of holes. Across Australia, the demand for refuges is so high that every second woman has to be turned away. We urgently need our government to restore lost funding to our dangerously underfunded frontline services, so that no woman and children ever again has to be turned away from a service because it is full.  Family violence is also about a third of all the work that overwhelmed community legal centres are doing across the country, so we want to see proper support restored to these vital services as well.

Let’s not miss this chance

There is no doubt political action is urgently needed. So Common Grace wants to encourage Christians to become informed voters who demand a real response and get this issue on the government’s radar. The longer the community evades the truth about domestic violence, the easier it is for politicians to call it a “national tragedy” in one breath, and slash funding to address it in the next.

Australia has found a moment which should not be lost if we are to achieve lasting change and end violence in the heart of our society – in our families. We pray that the Common Grace faith network will be part of a wider movement that helps end violence against women and children, everywhere.  In this 2016 election season, will you be part of it?

Yet, as 2016 Australian of the Year David Morrison recently said:

"It's not about the statistics.”

"We run the risk, at times, of being a nation of bystanders comforted by a few statistics. Let me tell you, there are people dying and people whose lives are absolutely ruined as a result of domestic violence and, what's more, we are all, as a society, the victim."

Why is this an election issue?

Find out more about your party’s plan to address family violence across Australia by looking at their position statements: