Rallying for our Reefs

Nicola Fraser is a marine scientist, grandmother, president of a diving Citizen Science group, permaculturist, and anti-plastic campaigner. Nicole has observed the climate crisis first hand, and wants to be able to tell her grand-daughter that she fought for the Earth. Rally with her on September 20th.

My relationship with the ocean started when I was a child, with my family visiting the beach nearly every weekend. I can remember sitting in the back of our VW beetle on the way home, salty, sandy, pleasantly tired, and eating the obligatory icy pole. As I grew older, I explored rockpools, learned to swim, snorkel, and sail and, eventually, to SCUBA dive. The latter was my entrée into the amazing underwater world I had previously only seen from above.

SCUBA diving led me to a citizen science group working in one of NSW’s marine parks and this group opened up a whole new world of study: science.  As part of this group I was able to participate in scientific projects and learn fascinating details about the ocean and its residents. After four years of citizen science I felt the need to formalise my scientific education and, at the tender age of 49 enrolled in my first university degree.

As a marine scientist, I have seen first-hand some of the impacts of climate change. The citizen science dive group investigated the health of the corals in our local marine park. During the years we worked on this project, there was a coral bleaching event and I watched corals turn stark white and die. They did not recover. There was nothing we could do other than record the deaths and take photos of the dying and dead corals. 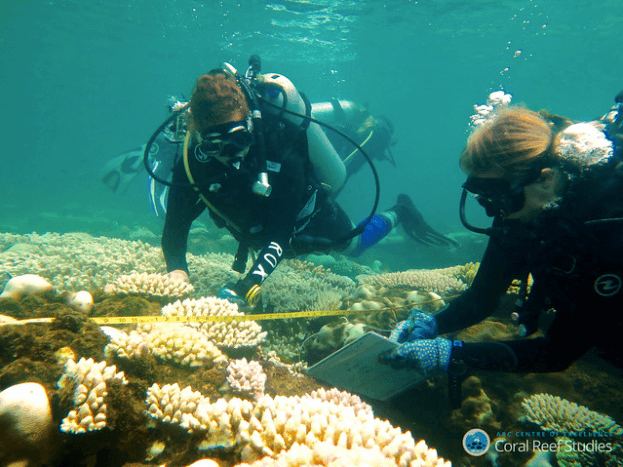 I have also seen a change in the underwater ecosystems. When I first started diving locally, there were large areas of kelp (a common broad-leaf seaweed) around the islands. Kelp had many uses for the Gumbangyiirr people, and other Aboriginal and Torres Strait Islander communities around Australia. It is home, and food, for a myriad of sea creatures.

Most of that kelp has now gone – it doesn’t grow in warmer water.  Fish that prefer cooler water are less common, and more of the tropical fish are present.

As climate change heats our oceans, everything is moving towards cooler water. Think about this on a global scale. . . .

Where do the Antarctic and Arctic plants and animals go?

Nowhere.  There is nowhere for them to go.  They will die.

The climate is changing too fast for animals and plants to successfully adapt. We are facing a climate emergency. There is nothing about this to debate. It is a crisis and we need to deal with it as such.

Some governments, corporations, organisations and individuals are making positive changes but not enough, so we need to take more serious action. Citizens need to stand up and show that we care. The alternative scares me witless.

My granddaughter is only two, but when she grows up and learns about this crisis I'm sure she will ask "What did you do, Granny?". I want to be able to say "I fought for the earth".

Please, wherever you are, stand with us on 20 September, however you can. The future of our beautiful earth depends on you.

Monique Hughes is a member of our Climate Justice team and is passionate about seeing Christians living out God's deep love and care for his creation by taking bold, grace-filled action on climate change.

Take time this week to reflect and pray through your response to the damage Nicola has witnessed to fragile reef ecosystems and her call that “The future of our beautiful earth depends on you.”

It may be grief for the devastating loss of habitat and the loss of life as these habitats die. Sadness for future generations who will never see the diversity and experience the beauty of God’s creation that we have freely enjoyed in our lifetime. Or anger at the global inaction to respond appropriately to this crisis.

It is right that we experience strong emotions as we live in this moment. But we are called to not be merely witnesses to this crisis. As Christians our faith informs and compels us to action. To embody the hope we have in Christ. To be sacrificial love in action.

On September 20th students across Australia and the world will step out of their classrooms to ask for action and demand more of our leaders. As Nicola imagines her granddaughter asking her “What did you do, Granny”, these young people are asking our leaders, and you, “What are you doing to help stop this crisis?”.

Do not be daunted by the enormity of the world’s grief. Do justly, now. Love mercy, now. Walk humbly, now. You are not obligated to complete the work, but neither are you free to abandon it.

The Common Grace community is joining the global strike for climate all around the country.  Put September 20th in your diary now, and find out where your nearest rally is, and whether there’s already a Common Grace contingent meeting there on our main climate strike page.

Find out the latest science on threats to our oceans thanks to climate now.

The Australian Marine Conservation Society has a number of campaigns you can support.

Protect the Barrier Reef catchment by thinking about how much beef you eat, and finding out where it comes from.