Jason John is the Common Grace Climate Justice Lead Campaigner, and will be on the streets with millions of others at the #ClimateStrike on September 20th. This Season of Creation, Jason calls for Australia to have a prodigal moment, a Zacchaeus moment, turning around now.

“They dress the wounds of my poor people, as though they were nothing, saying “peace, peace” when there is no peace.” Or  “Saying all will be well, when nothing is well.” (Jeremiah 8:11)

If I had to summarise global climate policy in a Bible verse, that would be it, because of the following graph, simplified from the Uniting Nations Environment Emissions Gap Report released last year (1). 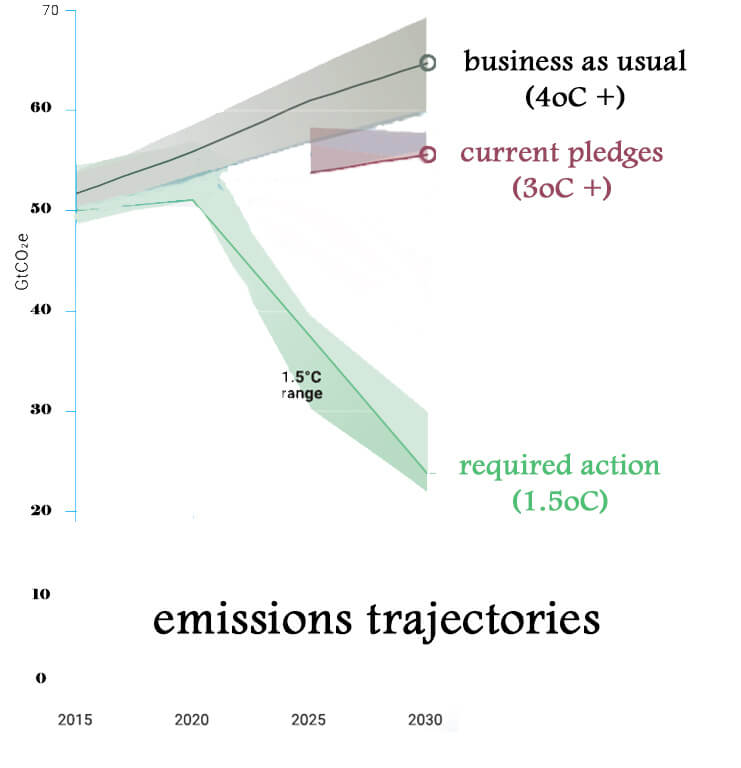 Global carbon emissions continue to rise along the black line, and will continue to do so past 2020 under “business as usual”.  At Paris, countries around the world realised that this was global suicide, and pledged to take action. All of the models considered by the Emission Gap Report predict that the pledges made so far will make emissions follow the red line.

This is less than one fifth of the commitment needed to get our emissions reductions onto the green line, where the Paris negotiators agreed that we need to be, to avoid catastrophic climate change for our neighbours now and in the future.

So if I had to summarise the challenge in a hymn verse, it would be the opening to the only song I remember from my many years of school chapel:

When I needed a neighbour,

When I needed a neighbour, were you there?

And the creed and the colour

And the name won't matter,

Our neighbours need us to commit to much more radical reductions, and to ACT NOW.

...the species which we haven’t yet driven to extinction (see our “Fauna” blog in week 2 of the Season of Creation)

People in their 50s and younger are screwed.

Because the graph above changes everything.

Jesus had contempt for the rich who contributed, very publicly, to the common good out of their abundance, whilst feeling magnanimous about it (Mark 12:38-44). Yet I see Australia acting in just this way to our Pacific neighbours, whilst undermining their efforts to push for adequate climate action.

We look like the rich fool storing up wealth for the future at the expense of our neighbours.

Instead, Australia needs to be the repentant prodigal- stopping our wasteful, indulgent lifestyles.  Returning humbly to the rest of the family, begging forgiveness and taking our proper place.

We need a Zacchaeus moment- repentance with actual economic consequences. Not just charity, but justice,

“And Zacchaeus stood and said to the Lord, "Behold, Lord, the half of my goods I give to the poor; and if I have defrauded any one of anything, I restore it fourfold.” (Luke 19:8)

I started with Jeremiah’s words of condemnation to those leaders who were profiting out of the status quo. But he didn’t just condemn, he offered a vision of hope.

Plenty of people are also offering Australia one. A vision of a...

… stable climate, allowing more people to stay in their communities, instead of hundreds of millions of climate refugees forced to relocate by 2050.

… one hundred percent renewable electricity economy by 2030. Some claim we are well on the way there.

… a place as a renewable energy superpower, both in terms of electricity and hydrogen for liquid fuels.

Imagine clean energy security for all of us.  Clean, sustainably, healthy jobs for generations to come.

A completely different world is possible, with an economy which spreads the benefit to many rather than continuing to concentrate it amongst the rich.

If we have a prodigal moment.  A Zacchaeus moment.

But it isn’t possible for long.

Other scientists are far less optimistic than this UN Environment figure (2).

Yet global emissions continue to rise, as does Australia’s emissions, despite a massive uptake of renewables.

We need to demand that our governments, Federal and State, at a minimum get out of the way by stopping their handouts to the fossil fuel industry, and preferably get on board so that, like Zacchaeus, we are able to make restitution to all those neighbours we took from wrongfully for so many decades.

The prodigal needs to turn around now.

Is the idea of Australia as the prodigal son reasonable and useful? What would appropriate repentance for Australia look like to you? What other images or metaphors capture the challenge before us? Perhaps Earth as the beaten man on the side of the road, who we must pass by or risk helping?

The vision of hope will not be handed to us, we will need to create it together. Where do you see yourself contributing? Where does your passion intersect with the world’s need?

you are abundant in generosity and we rejoice to be creatures sharing in your beautiful world. Our hearts are heavy at the brokeness and the way our nation continues to exploit and misuse Earth’s resources. We repent and turn to you.

Give to all in this land now called Australia a desire for righteousness and peace, the will to work together in trust, hearts to seek the common good and a desire to share with justice the resources of Earth.

Soften the hearts of our leaders, may they lead us in making reparations and championing a clean energy world for the sake of the last, the least and the lost.

There are so many ways we can respond, and are responding. One is to join people around the world on September 20th in a show of solidarity and determination to push for stronger climate action. We will provide you with more information about the #ClimateStrike in the next weeks.

(2) Scroll down to the heading A Just Response on this site.