The Power of Small Actions

Grace Vegesana is the Western Sydney Organiser for the Australian Youth Climate Coalition, an instigator of the Not Business as Usual Alliance, an Environmental and Climate Science and Law student at Macquarie University, and a member of Common Grace.

I would like to acknowledge the Traditional Owners of the land on where I stand, the Darug people of the Darug nation, and that sovereignty was never ceded. I pay my respects to Elders past, present, and emerging, and acknowledge that we cannot have climate justice without justice for First Nations people.

We should never hold the belief that we, as individuals, are too small to achieve incredible change.

When Greta Thunberg sat in front of the Swedish Parliament just over a year ago as a 15 year old in a lonely protest demanding stronger climate action, I doubt she could have predicted that there would be millions of people worldwide standing with her, and mobilising for our future.

My faith in Jesus is the reason I dedicate my life to fighting for climate justice - because I know that we are called to protect creation and love our neighbours, whether they are plants, animals or people on the frontlines of climate change.

This faith compelled me, as a 19 year old, to manage and summon enough courage to ask my human resources department if our business could attend the September 20 Climate Strike in Sydney, but I never expected that this would snowball into that same business coordinating the Not Business As Usual Alliance. In this alliance, over 2,000 Australian businesses are allowing their employees to attend the Climate Strikes because we should not have to pick between our paychecks and the planet.

As a climate campaigner, throughout these moments that require me to sacrifice my own fears for the bigger picture, I find myself drawn to God’s word:

”For God did not give us a spirit of cowardice, but rather a spirit of power and of love and of self-discipline. (2 Timothy 1:7 NRSV)

When we gathered in one of the biggest coordinated global mobilisations in history three days ago, perhaps we also triggered events beyond our imagination and expectations. Millions of people from all walks of life united across the world to stand up for our future and our climate, and demand that we justly transition away from fossil fuels to a carbon neutral, renewable energy future. There were over 100 #ClimateStrike events organised across Australia, drawing 300,000 people nationally, and over four million internationally. We are no longer just individuals; we are individuals as part of a momentus, collective movement to change our world. 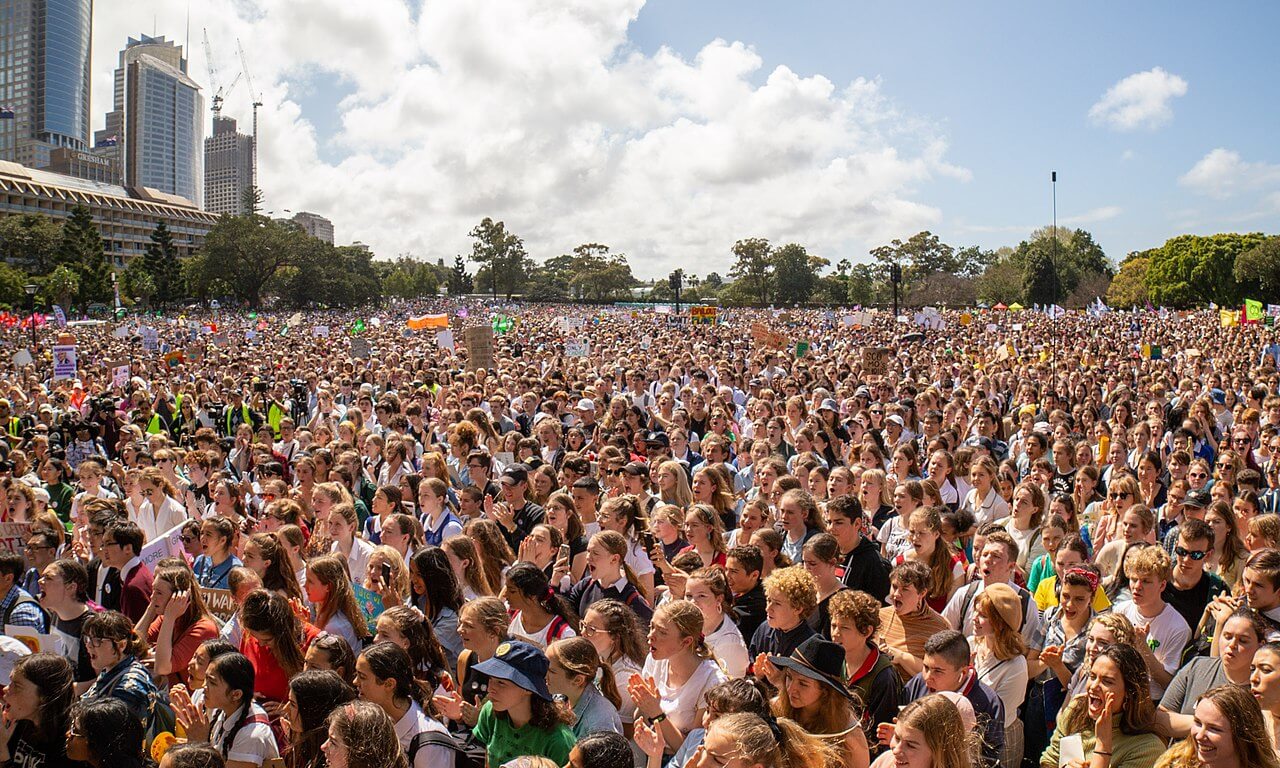 As the Western Sydney Organiser for the Australian Youth Climate Coalition, I constantly find my drive alternating between hope and fear. Hope that the climate crisis can forge a new world, as our society realises the link between the fossil fuel industry’s donations to our politicians, and how the intersectional fight against classism, colonisation, gender inequality, and racial justice are all connected to climate justice. Hope that these millions of people stepping up for our climate will truly change how society functions.

But also eco-anxiety, because Western Sydney is on the frontline of climate change impacts in this country. Also, as the most culturally, linguistically and religiously diverse region of Australia, many of us have family in frontline communities overseas, in the Pacific, in Asia, in Africa, in the Global South.

For these communities, climate change is already here, and the fight isn’t over.

We are called as Christians to love our neighbour. Yet in August, Australia forced the watering down of the climate statement at the Pacific Islands Forum, because we are one of the largest exporters of fossil fuels. Tuvalu’s Prime Minister said to Scott Morrison, 'You are concerned about saving your economy in Australia … I am concerned about saving my people in Tuvalu’. Rev. James Bhagwan’s plea to the Prime Minister, as one Christian leader to another, also fell on deaf ears.

Today at the United Nations Climate Summit, 3 days after millions of people attended the Global #ClimateStrike, Scott Morrison refuses to attend, despite being in the United States. Where our governments prioritise the fossil fuel industry over their people and fail to represent us, we need to step up and fight for our future. As part of God’s interconnected creation, the actions that we take today will have consequences that are inherited by all those to come, whether that be us, future generations, the planet, or flora and fauna. Will they see us as a blessing, or a curse?

Each of us has been given a unique gift to serve others and play a part in our communities, and if we do not show God’s grace to our Earth and climate now, then who will, and when? (1 Peter 4:10)

Grace gives two examples of individuals who achieved more than they imagined possible at the time, on behalf of the rest of Creation.

They call to mind the blessing in Ephesians in the name of God who “is able to do immeasurably more than all we ask or imagine, according to his power that is at work within us”

What about you? Have you had the courage, even if just enough courage, to act lovingly on someone’s behalf, and seen results beyond what you expected or imagined? Did you act alone, or with others?

Remembering and sharing such times will help us in the face of the climate challenge ahead of us.

This week in the Season of Creation is usually “Blessing of the Animals” Sunday, but this week, millions of people gathered around the world to be a blessing to the whole of Creation.

We were returning the favour, as the rest of creation is a constant blessing to all of us- physically, emotionally, and spiritually. And after Tau’alofa’s challenge from last week, we must remember to talk about the rest of Creation, because we are part of it. Part of the garden.

So, sharing the imagination and insight of an ancient psalmist, let’s pray:

God we praise you with all the heavenly host!

With the sun and moon and shining stars!

With the highest heavens and those throughout the universe

With all the creatures of the oceans

With mountains and hills, fruit trees and mighty forests

With all animals - wild and domestic

With everything which creeps and flies.

With rulers and with plebs

With young men and women alike, old and young together!

We praise you, for you alone are exalted, your glory is seen throughout the universe.

Thanks to all the Common Grace supporters who attended #ClimateStrike rallies across Australia, raising your voices with thousands of others for the protection of God's Beautiful Earth. In Melbourne, Sydney, Brisbane, Perth, Adelaide and Canberra, Common Grace members marched together through our meet up points, raising our banner and representing Jesus' heart for justice at the rallies. 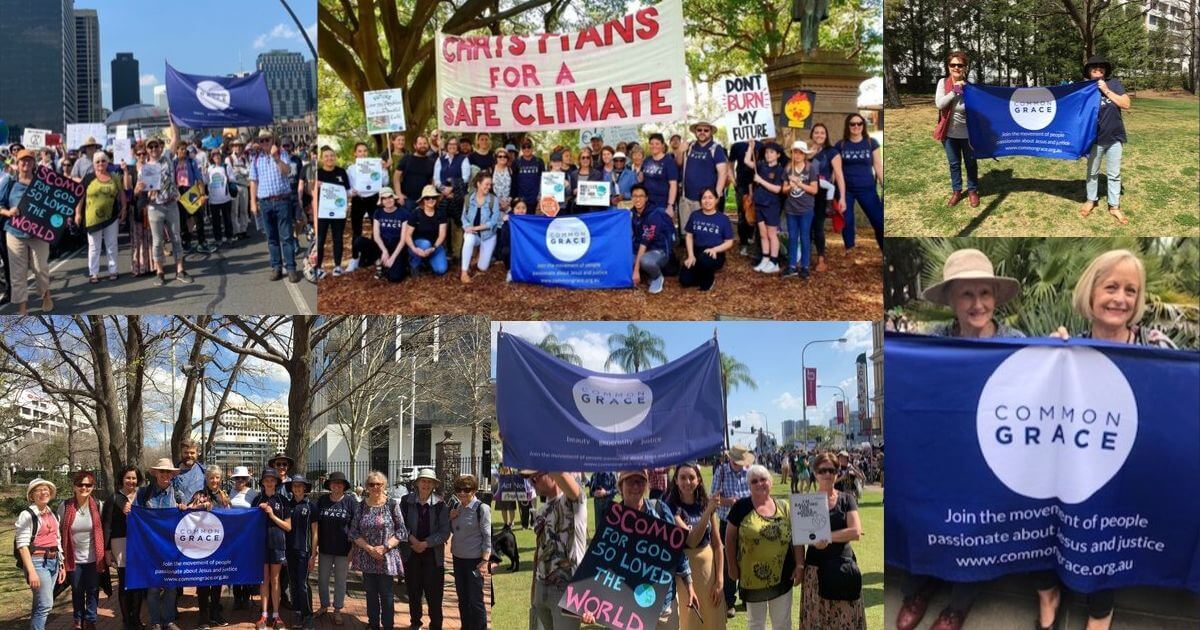 Be encouraged - lots of people turned up! And check out our online rally page where you can add your picture, share your reason for rallying and read other people's reasons for taking climate action.

Thanks for journeying with us this Season of Creation.

We reflected on being a prodigal nation, challenged to respond on behalf of the rest of the global family, knowing that later is too late. Because all things are connected, we grieved the dying reefs and the Bramble Cay melomys.  We heard from those threatened by storms around the world, as hurricane Dorian made landfall. We cared, because we are all part of the Fonua. And we acted, building to the #ClimateStrike this week.

So now let’s pray again, to the God who is “able to do immeasurably more than all we ask or imagine, according to his power that is at work within us.”

Pray first for ourselves.  How is God wanting to work within us, as individuals?

Pray for Common Grace.  What is our contribution to the climate movement in 2020?

Pray for our political leaders:

encouragement for those wanting to lead, but overwhelmed by the obstacles.

repentance for those who are bound in service to mammon

“Our soul life is developed only in contact with these surrounding experiences… if this outer world is damaged, then the inner life of our souls is diminished proportionately.” (Thomas Berry)

“The whole creation must be seen as the bodying forth of the Word and Wisdom of God and as sacramentally present in all things.” (Rosemary Radford Ruether)

“… Earth reveals. It is the place of encounter with the Holy Spirit .” (Denis Edwards)

“… all diverse strands in the web of life are expressions of the creative power of the cosmos which is ultimately empowered by the Creator Spirit. The enormous diversity of species itself points to the inexhaustible richness of the Creator; whose imaginative goodness these species represent… when a species goes extinct we have lost a manifestation of the goodness of God. “ (Elizabeth Johnson)

"… modern ecology is absolutely central to the future of religion… Christianity specifically will gradually cease to exist if the natural world continues to be devastated at the present rate. There is a deep and dependent interrelationship between the development of religious attitudes and the sustainment of the natural world… human beings, living in a feedlot world where all wilderness has been destroyed… will slowly lose touch with the possibility of the development of culture, art, religion, and spirituality… we human beings will simply shrivel up spiritually and lose our ability to perceive and experience the deeper issues that give meaning to our lives and the transcendent reality that stands behind the natural world and all that is…” (Paul Collins)