Byron Smith has a doctorate in Christian ethics on emotional responses to climate change. He frequently speaks and writes about following Jesus in a warming world. He’s authored a number of scholarly articles and book chapters and has joined in creative peaceful actions against new coal projects. He has 2 worm farms and 3 bee hives and a regular podcast. 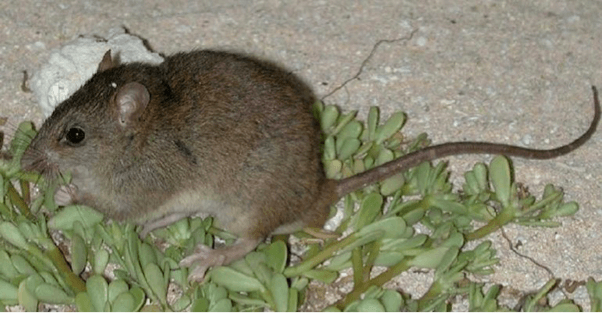 This is the Bramble Cay melomys (Melomys rubicola), aka Bramble Cay mosaic-tailed rat. On earth, there are over 2,200 rodent species comprising about 40 per cent of all mammal species. What's one rat?

And the Bramble Cay melomys is amongst the most insignificant of rats. It is not particularly genetically distinct from a number of other similar species of melomys. It's never been useful for any human project. We've never hunted it for fur or meat. No child has ever had one as a pet. No tourists have ever paid to see one. It may perhaps be considered the least of all mammal species.

Bramble Cay, from which this rat draws its name, is its only known habitat. And this is amongst the most insignificant of islands. Just a few hundred metres across, less than 4 hectares in area, the cay is a tiny dollop of sand in the Torres Strait, closer to PNG than the Australian mainland. It is the northernmost tip of the Great Barrier Reef and the northernmost piece of land over which Australia claims sovereignty. And it is flat and basically featureless, never rising more than a couple of metres above mean sea level. No humans have ever lived on the island. It is amongst the least of all islands.

When tiny Bramble Cay was first discovered and named by Europeans in 1845, the little rats were so plentiful that the crew used them as target practice. A month later, another ship came and collected a specimen, which then sat preserved in storage in London for almost eighty years before finally receiving a formal scientific description from Oldfield Thomas in 1924.

In the 1970s, it was recorded that there were several hundred Bramble Cay melomys flourishing on the fleshy leaves of the scrub that holds the sand together. A 2004 survey found just a dozen. The last official sighting was in 2007. A fisherman who often visits the island says he last saw a melomys – just one – in late 2009. This solitary animal may have been the endling of the Bramble Cay melomys, that is, the last of its species. It was declared extinct this year.

Habitat destruction from ocean inundation was almost certainly to blame for their extinction:

"Available information about sea-level rise and the increased frequency and intensity of weather events producing extreme high water levels and damaging storm surges in the Torres Strait region over this period point to human-induced climate change being the root cause of the loss of the Bramble Cay melomys. Significantly, this probably represents the first recorded mammalian extinction due to anthropogenic climate change."

This creature is not only another item on the embarrassingly long list of lost Australian mammals, and not only might it stand in as a terrestrial placeholder for all the (largely unrecorded) marine species lost in the northern Great Barrier Reef during recent catastrophic bleaching events also caused by a warming ocean. This insignificant rat is also a symbol for all the useless little species, the unknown earthlings winking out all over the place on a rapidly changing planet, whose lives and existence are precious to God.

Today, we mourn the Bramble Cay melomys, a gift we were largely ignorant of having received, a creature whose loss doesn't threaten us, yet whose demise was our fault.

This too was one of the creatures called to praise their Creator in the great choir of life (cf. Psalm 148). Its voice is now stilled. Let ours fall silent also.

Have a look at these three short videos on wildlife population decline.  All would be suitable as an introduction to the prayers of intercession in worship.

Monique Hughes is a member of our Climate Justice team and is passionate about seeing Christians living out God's deep love and care for his creation by taking bold, grace-filled action on climate change.

In speaking to the loss of the ‘most insignificant of rats’, the Bramble Cay melomys, Dr Byron Smith puts into focus the mounting loss we are witnessing after decades of inaction on warnings of human-induced climate change.

Headline making events such as Iceland’s first glacier lost to climate change or unprecedented wildfires raging in the Arctic, may make the loss of the Bramble Cay melomys seem ‘insignificant’ to any ‘human project’ or interest. However, it was created, known and cared for by God. Its loss is not insignificant to Him and shouldn’t be for us.

"How many are your works, Lord!

In wisdom you made them all;

the earth is full of your creatures.

There is the sea, vast and spacious,

teeming with creatures beyond number—

living things both large and small."

These creatures, beyond number, both large and small, are precious to God. As Christians we are invited to participate in God’s kingdom work to care for his creation he has so lovingly and beautifully made.

This week take time to pause and reflect on those things that may seem insignificant to us but hold great value to God. Does your perspective need to change? How are you being challenged to help care for God’s creation?

Spend time in prayer for God’s beautiful creation. As we mourn the lives that will no longer sing praise to their creator, pray that we would not grow weary, or silent, in calling for action and justice.

Now is the time to start inviting your friends, family, and congregations to join you at the September 20th #ClimateStrike rally. We are collecting a few resources to make your life easier, including notice bulletins and powerpoint slides .

Plus, we have a short reflection on why Common Grace is supporting the school strike, incase people have qualms about supporting students as they take time off school.

You can keep up to date on Common Grace meeting points, and new rally locations here.

Why are you rallying? Whether or not you can make September 20th, we’re asking you to represent your motivation for acting for God’s beautiful Earth on our photo wall. Over the next weeks we will be gathering photos of individuals and churches who believe we need to rally for climate action.

Please contribute to our online gallery now, and if you are part of a congregation, could you organise a photo too?

At this time we’re asking you, our engaged friends who are already in touch with the desperate need for action and the grief of inaction, to send in your pictures. Help us encourage each other, and show the world why Christians are taking action to protect and restore God’s beautiful Earth.

Click through to our represent gallery to see why others are rallying, and to join in by posting your photo.