A delegation of Christian leaders have this morning delivered an open letter signed by more than 800 Australians calling on Prime Minister Tony Abbott to accept the crowdfunded gift of solar panels for Kirribilli House. Photos of the delivery to the Prime Minister's Manly electorate office are available here. 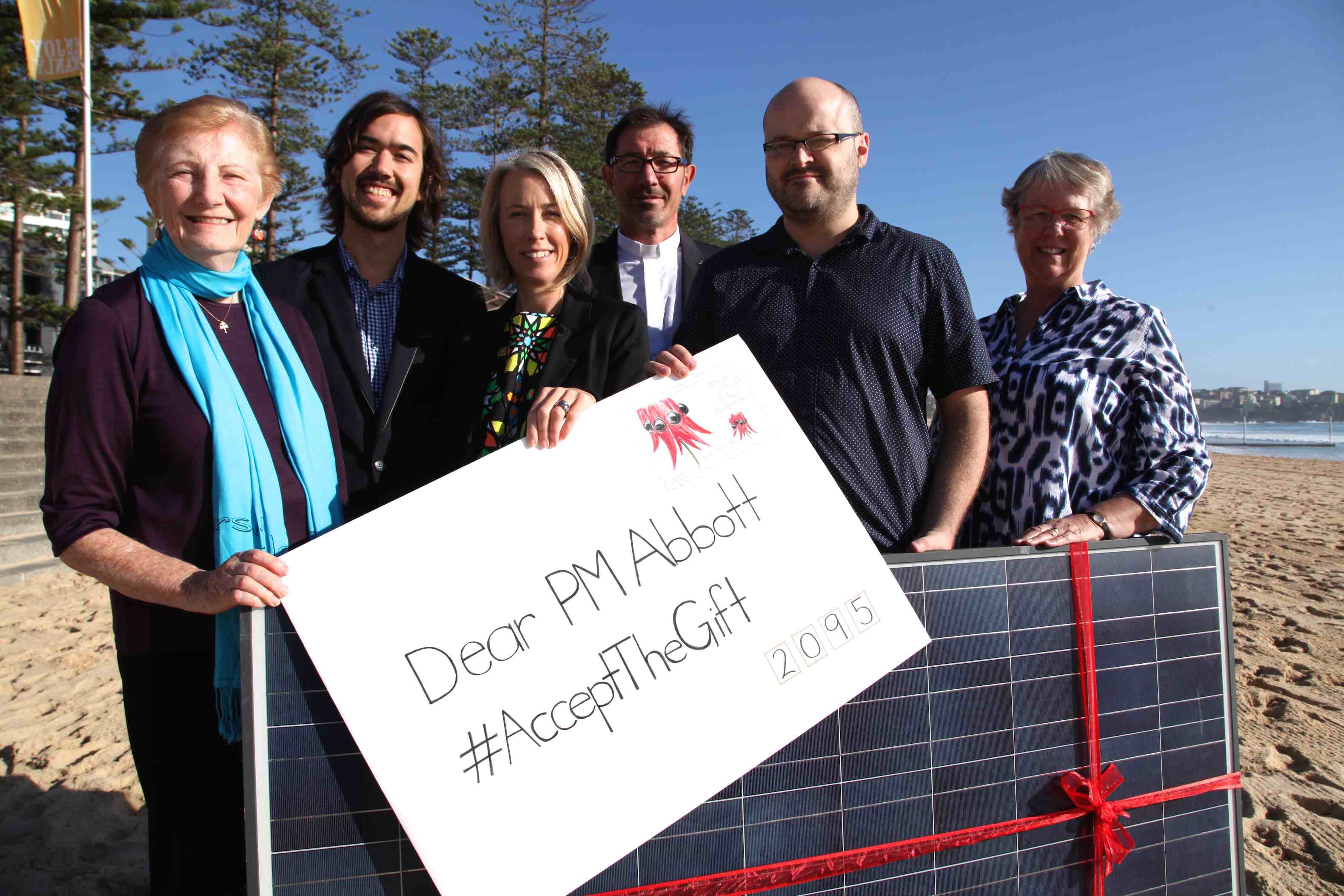 A diverse delegation of Christian leaders have this morning delivered an open letter signed by more than 800 Australians calling on Prime Minister Tony Abbott to rethink the government's rejection of the gift of solar panels for Kirribilli House.

"Experts have assured us there is really no practical reason to reject the gift of solar panels for Kirribilli House," said Jody Lightfoot, climate justice campaigner at Common Grace.

"We understand the important heritage value of Kirribilli House so we had a chat to Sydney Lord Mayor Clover Moore who told us the City of Sydney has already installed 5,500 solar panels on nearly 30 buildings including ones with irreplaceable heritage value such as Sydney Town Hall,” said Mr Lightfoot.

The letter rejecting the solar panels came via Michael McCormack, Member for Riverina, in his capacity as the parliamentary secretary to the finance minister.

“The rejection of our gift of solar panels for Kirribilli House is symbolic of the government’s failure to invest in renewables, but we’re here to provide the Prime Minister with an opportunity to choose a brighter future for all Australians and to back the 9 in 10 Australians who want a strong Renewable Energy Target," said Mr Lightfoot.

"We know that climate change means more frequent and intense extreme weather events hitting the world's poorest people the hardest. We only need to look to our Pacific Island neighbours to see the devastating cost of climate change. We could be leading the world in taking action on climate change and as Christians we urge Prime Minister Abbott not to reject the sun's grace," said Jarrod McKenna, National Director of Common Grace.

The gift of twelve solar panels was crowdfunded over four days in December by Common Grace, a movement of Christians who are passionate about Jesus and justice. The Solar Council (the peak body for the solar industry in Australia) offered to install the crowdfunded solar panels for Kirribilli House at no cost.

“Trying something new can feel daunting, but we encourage Prime Minister Abbott to look to the Vatican where in 2008 Pope Benedict accepted a gift of 2700 solar panels to provide clean energy to the Holy See," said Sister Jan Barnett of the Sisters of Saint Joseph.

“More than one hundred Australians pitched in to buy the gift of solar for Kirribilli House and now hundreds more are urging the Prime Minister to accept our gift. The solar panels are a gift for the nation, from the nation, to demonstrate public support for a clean energy future,” said Byron Smith, Assistant Minister, St George's Anglican Church.

“If the City of Sydney can install solar panels on the Sydney Town Hall just across the harbour and Pope Benedict could accept a gift of solar panels for the Vatican, we believe Prime Minister Abbott has no excuses for not accepting our free gift for his Sydney residence," said Mr Smith.

“If the Prime Minister accepts the gift of solar for Kirribilli House he’ll be in good company with 1 in 5 Australian households already using solar,” he said.

The open letter encouraging the Prime Minister to accept the solar gift (signed by more than 800 Australians in the last five days) is below.

We are disappointed that the Government has rejected the gift of solar panels for Kirribilli House that was crowd funded last Christmas by 142 Christians. We had hoped you would accept them as a great first step to get Australia moving towards a strong Renewable Energy Target.

We understand that the reasons for declining the gift are Kirribilli House’s heritage listing, ongoing costs of cleaning and maintenance, and security concerns. So we did some research and found many people in your home state and abroad have overcome these challenges.

Sydney Lord Mayor Clover Moore informed us that the City of Sydney has already installed 5,500 solar panels on nearly 30 buildings including ones with irreplaceable heritage value such as Sydney Town Hall. We discovered Australia’s own actress, Cate Blanchett, installed 1,906 solar panels on Sydney Theatre Company heritage building. I’m sure she’d be willing to give some pointers if you gave her a call?

On cleaning concerns, John Grimes, CEO of the peak body of the solar industry in Australia (Australian Solar Council), informed us that solar panels do not require ongoing cleaning or yearly maintenance - they are cleaned by the rain. Some utilities require a check of the inverter, but this can be done on the ground every five years.

Looking abroad, did you know that President Carter managed to get solar panels installed on the White House way back in 1979? And Pope Benedict negotiated the same kinds of hurdles when he accepted a gift of 2700 solar panels providing clean energy to the Vatican in 2008.

Prime Minister, we believe that a man in your position can overcome challenges like heritage listings and cleaning concerns and choose a brighter future for all Australians. We therefore urge you to implement a strong Renewable Energy Target and accept the gift of solar panels for Kirribilli House, as a powerful signal to the world that Australia’s renewables industry is officially open for business.

Yours sincerely,
Australian Christians and friends

The Big Smoke: Dear PM, #AcceptTheGift of solar panels and do your bit to save the planet