A few years ago I wrote a worship song during a time our community were grappling with questions around what it looks like to be engaged in climate justice as God’s people.

I took the song along to sing as the opening prayer at an event planning meeting. The event was Creative Conversations on Climate Change for Earth Hour, an invitation to artists of all disciplines to add their unique voice to the conversation about climate change. As my fellow team members joined in this song-prayer, I distinctly remember a deepening sense of both lament and hope. As we sang these words echoing Romans 8, where creation itself is groaning and travailing in frustration and expectation for the restoration of all things to come, I was stirred to feel a deep lament over our broken, damaged creation and simultaneously a determined sense of hope in the restoring work that God is already doing and will bring to completion.

A few months before I had been reflecting more deeply on a theology of creation in the context of teaching on faith and creativity. Over many years of teaching on creativity, creation had always held a strong place as a foundational paradigm. In the beginning God created, and he created humans in his image, therefore humans are creative as the Creator’s image-bearers. But as we came to prepare this particular week of teaching, we decided to go deeper into the end game of the story in which God re-creates all things, a new heaven and a new earth. In fact God has begun that work in the resurrection of Jesus which is currently being outworked in the world. Therefore the act of creativity not only reflects the image of the Creator who created in the beginning but the re-Creator of all things in the end, who invites us into that mission of re-creation in the now. And so if that is true, then not only is it an encouragement to flourish in our creativity, it also highlights that there’s something terribly wrong with the current state of creation. If our calling is to re-create and restore with our Creator, then how have we gone so very far wrong in damaging our precious planet to such catastrophic ends? There is much to lament! And yet in the midst of this picture, like a gentle whisper, I hear the voice of the Spirit reminding me, God is doing the work of restoration, that we would have eyes to see and conviction to join in.

One of the seasons we’ve sung this song was during last year’s Creative Conversations events. The focus this time was on being global neighbours and considering whether Australia is doing our ‘fair share’. One of the most striking parts of our conversation was with the 350Pacific Climate Warriors as we considered the dire effects of climate change already felt by our pacific neighbours. Both the current stories and predictions of what is to come for small island nations with coastal infrastructure as sea levels rise was harrowing. We raised money for our 'neighbours' from the Marshall Islands, Kiribati, Tonga, Fiji, Samoa and more as they passionately and creatively share their story and advocate for their people. I will never forget the footage of them standing in front of an open cut mine where they had traveled to be part of the climate talks in Germany late last year. The realities of the connection between the action going on behind them and the environmental trauma being faced by their communities back home hit hard. The image of the mine sits strongly in my mind like an open cut wound in creation itself, groaning, as these young Pacific Islanders groaned with it. Come, Jesus, come.

Just a few weeks ago we sang this song at our Sunday gathering when Aboriginal and Torres Straight Islander leaders from The Grasstree Gathering visited us. I had attended the theological forum on the Friday and was struck by the words of Brooke Prentis as she spoke barefooted and offered a challenge to us to tread lightly on this earth. She described a picture of Kurnell where Captain Cook landed, once flourishing with an abundance of life, now crowded by the pollution of industry. And as we gathered at Kurnell to pray on the Sunday, I once again felt an agonising groaning in the Spirit with creation over the brokenness of our story in that place. One of the strong mantels of Grasstree is to remind the broader church we have many things to learn from our First Nations brothers and sisters. A stronger connection to and care for creation is surely one of them. Come, Jesus, come. 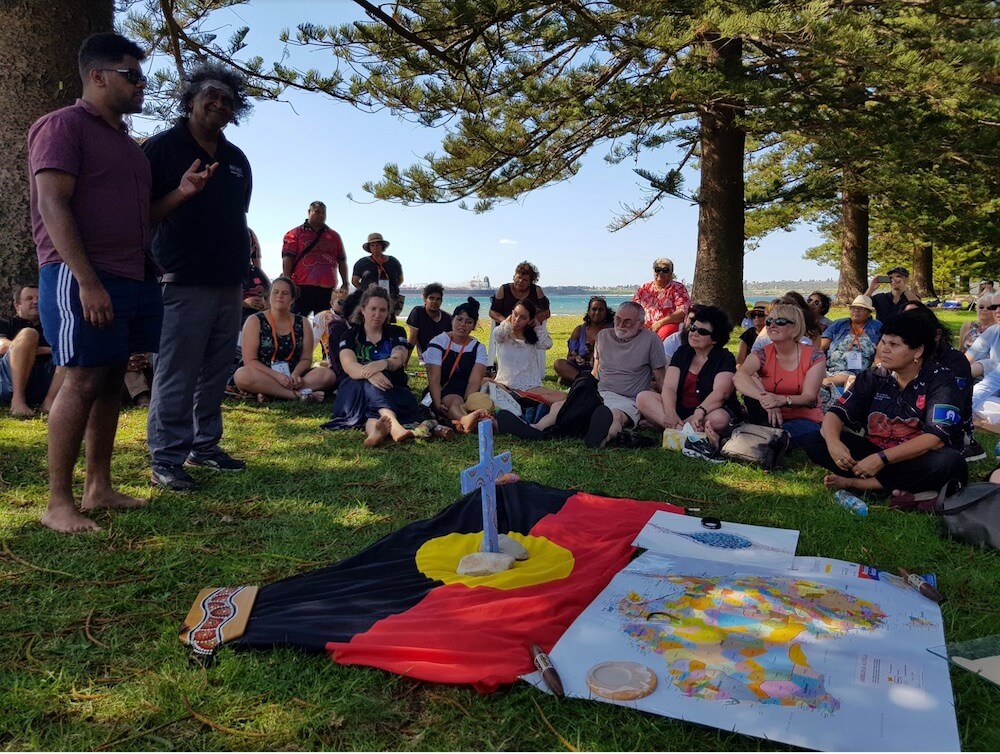 As I’ve led this song in different contexts, I’ve sensed a warning in praying these words ‘Come, Jesus, come’. The danger is if we have faith Jesus is coming, we can sit back and wait for him to do the restoration and we allow the damage to continue. I think that misses the point. And so I find myself often accompanying the song with a prayer that goes something like this…

Jesus, come in me. Come in the way I live my life and care for creation. Change my action. Help me join in your restoration.

Jesus, come in our communities as we make choices to contribute and not harm.

Jesus, come in our governments and big businesses as they consider the future and negotiate and legislate and find better paths forward.

Want to sing this song in your community?

If you’d like to use this song in your communities you can find the lyric video on Youtube, purchase the track from iTunes and download the charts.

Helen Wright works as a Pastor (Creativity and Justice) at Newtown Mission and oversees Annandale Creative Arts Centre. She has recently released a worship album ‘Heartcries’ with a passion to see songs of God’s justice and mission sung in our communities.