My journey with Jesus started when I was four. I wouldn’t identify as Christian for nearly 20 more years. But I remember seeing starving children on television and wondering why they suffered and I didn’t. With no real connection or understanding of why, I remember thinking of those images and as a child wanting to “do good” so I could make the world a better place. I believe that God moves in all of us in this way.

Now as a 37 year-old Christian who has gone through all the doubts and challenges a life of faith brings, my prayer and spiritual life always brings me back to how to use the privilege of being born in Australia in the most effective way for God’s Kingdom. In many ways I’m still that kid wanting to do good in spite of all my imperfections, to somehow alleviate the suffering of others.

For a few years now, I have been experimenting with non-violent living. There’s lots to be said about non-violence, but I am drawn to it as I follow Jesus, trying to love my neighbours, love my enemies and to work for love and not for money. I believe non-violence is also the most effective way to use my privilege to challenge the injustices we see around us and most of us feel powerless about. In short, for me it is the best way I have found to try and follow Jesus.

As a Christian, I see global warming as the single greatest challenge for the global community, those most affected will be the poor and those yet to be born. International governments have agreed to try and keep global warming to 2 degrees below pre-industrial levels. At this temperature, the world will lose one-third of it’s fresh water and many more people will die of heatstroke in summer.

The lives of young people and those yet to be born are under imminent threat at a modest 2 degree change (and worst case scenario, we will hit 6 degrees by 2100 if no action is taken to reduce greenhouse gas emissions, 6 degrees will mean all but a few humans might go extinct). This is to not even mention children dying from lack of freshwater in Bangladesh right now, due partly to global warming.

I feel overwhelmed and full of despair at these things.

But I have hope. We pray to God as Jesus taught us “your Kingdom come” without thinking of these powerful words.

I have pondered hard on these words as a Christian in Australia at this time in history. And like all people of faith, I am moved to respond to my Creator.

My hope is irrational and goes against all of the evidence I see about where we are going with global warming. The end result of our greed and ignorance of God’s Law. Since I became Christian, I have had hope for this world. Hope that the starving babies will be fed, the crying parents comforted, and the greedy tossed from their thrones- into a loving just community.

The only logical response to the hope I have in Jesus is to act. How can I use what God has given me to obey the commands of Jesus to love my neighbours as myself? 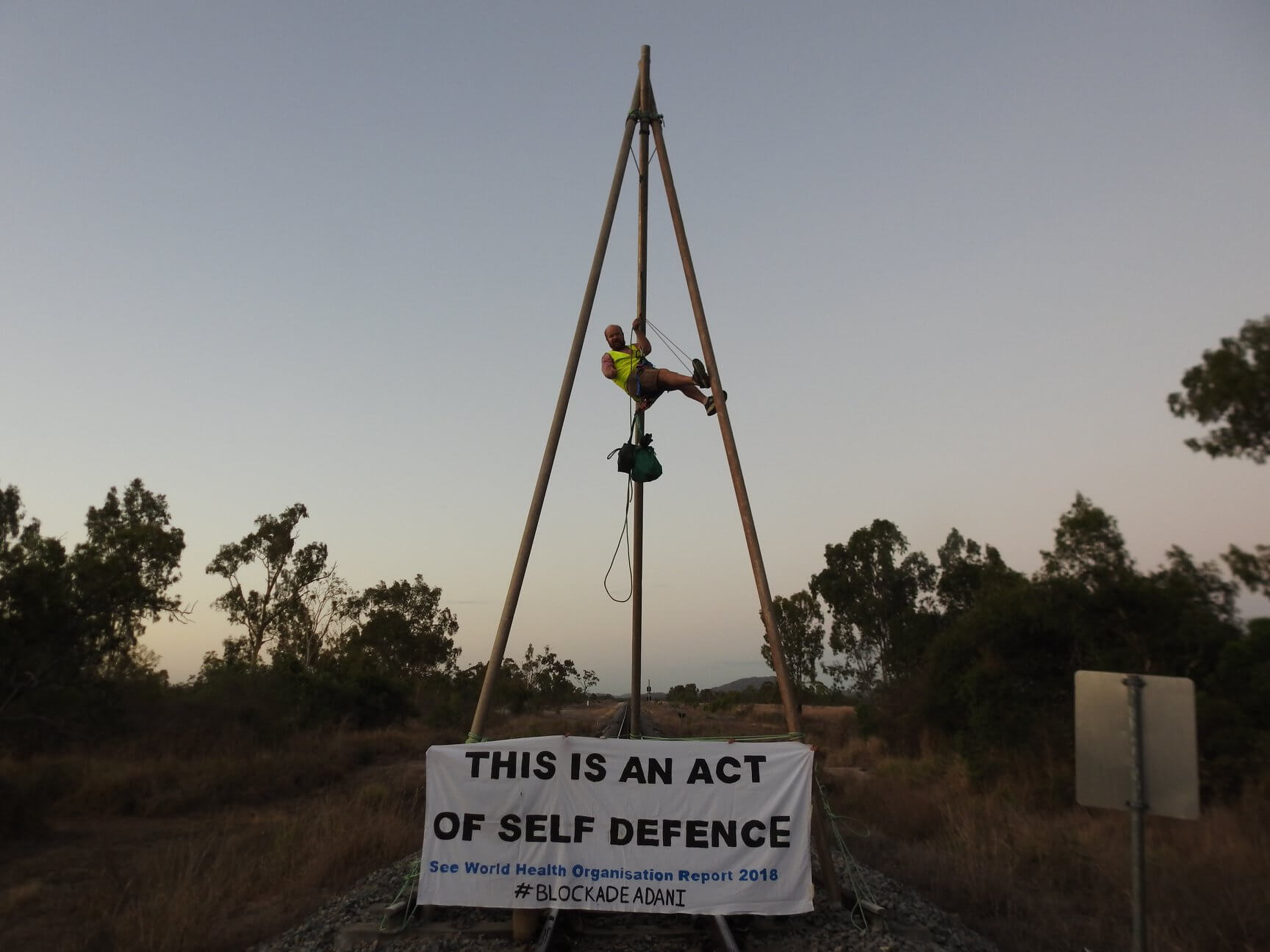 In response to my prayer life and the severe threat of global warming, late last year, I blockaded two coal trains in Central Queensland. The trains were taking coal to the Abbot Point coal terminal on the Great Barrier Reef. Coal is one of the biggest carbon polluters humanity uses. If Australia’s coal exports counted in it’s greenhouse gas emission output, it would double our current stated emissions. This would put us well outside our mild internationally agreed reduction targets.

I used my privilege and witnessed for a world where we don’t need to destroy our climate to support our lifestyles, whilst physically stopping coal from getting out of Australia, to be burnt and put into the atmosphere. I lovingly told police I wanted a better world for their children.

I prayed for the children yet to be born.

After I was arrested, I had the idea of Christians in Australia everywhere non-violently, lovingly, getting in the way of the businesses that are destroying the future.

Jesse, a friend of mine from Sydney decided to put his body and freedom on the line as well. In January, Jesse locked on the same train line with barrel filled with concrete, stopping coal from reaching Abbot Point Coal terminal for 11 hours. 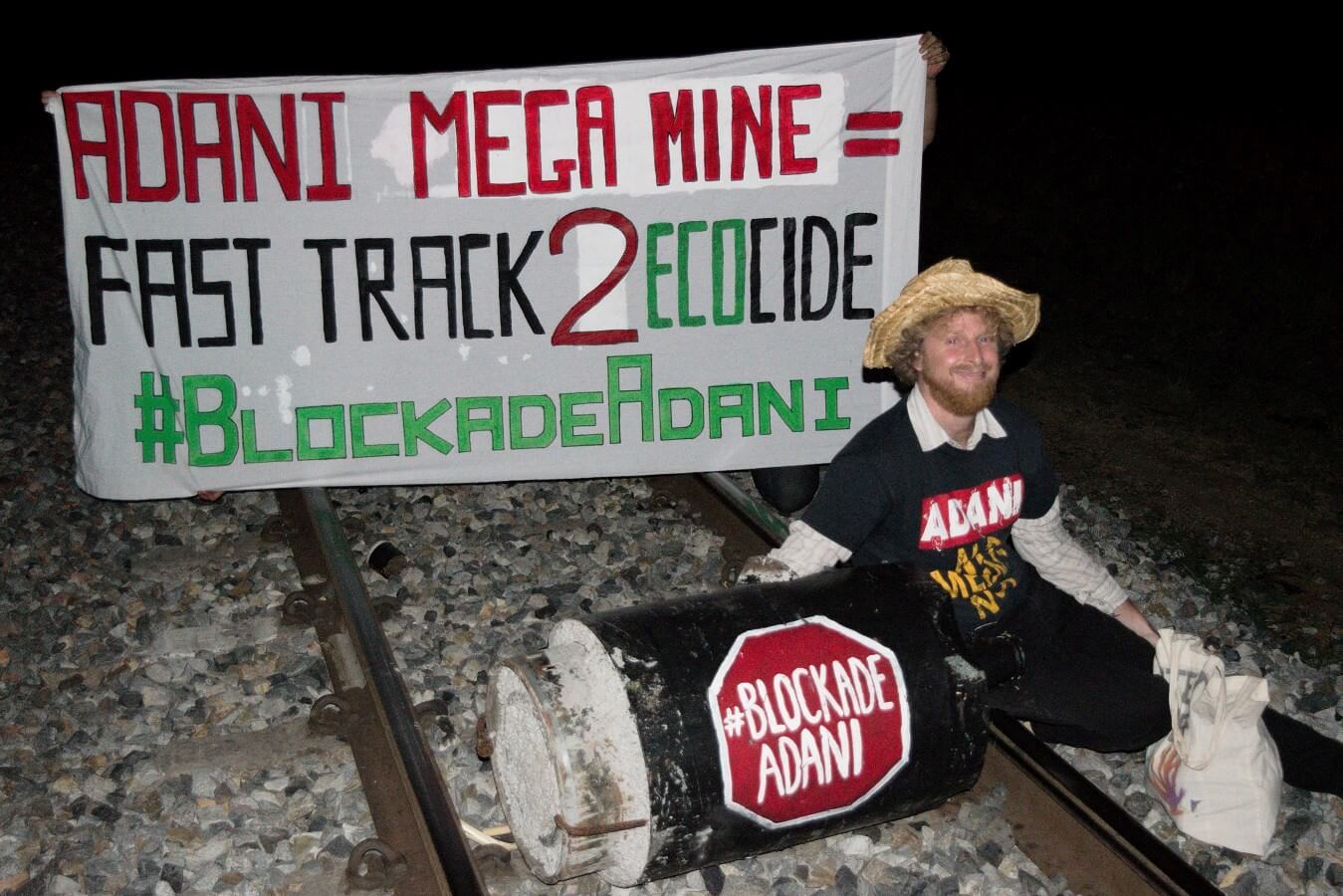 Jesse from Christians for Climate Action stopping trains full of coal getting to the Adani owned Abbot Point coal port in January 2019.

Together with a few other friends, we decided to form Christians for Climate Action, a group of committed Christians seeking to train and prepare to use our bodies to lovingly join with any large-scale civil resistance to global warming. Central to our Christian calling is to seek justice for our neighbours. We have the collective power to put our love into action to help protect creation from the greed that has infested our community and is destroying our climate.

Governments and businesses have failed to act, distracted by money and short term political power, our safe climate has been put at risk. As a Christian, I fear I too have been far too distracted by these things in my life. How can I move out of fear, so I can be about my Father’s business?

We want to help Christians to come together, to lament for creation and suffering as it stands, to work together through our fears of witnessing for God’s love through direct action and to eventually stand as a community for love, to protect our vulnerable neighbours.

Greg Rolles is 37 and has spent the last 7 years exploring non-violence and Christianity, and how to live faithfully (imperfectly) in a world of greed and exploitation.