Today, over one hundred and fifty Australian faith leaders signed an open letter to Prime Minister Scott Morrison, acknowledging that we are in a climate emergency and calling for climate justice.

Specifically, the letter echoes the three urgent, necessary and reasonable actions highlighted by tens of thousands of students in the School Strike for Climate movement:

• Stopping the proposed Adani Carmichael coal mine in Queensland
• Committing to no new coal or gas projects in Australia
• Moving to 100% renewable energy by the year 2030.

The leaders involved come from a wide variety of faith backgrounds: Buddhist, Muslim, Jewish; Orthodox, Catholic, Anglican, Uniting, Presbyterian, Baptist and more. They write, "Despite the differences in our faith, we all regard addressing the climate emergency as our shared moral challenge. We stand together for our common home, the Earth."

The letter is already getting coverage in the mainstream media (e.g. SBS and The Guardian and ABC) and was the initiative of our friends at Australian Religious Response to Climate Change (ARRCC). 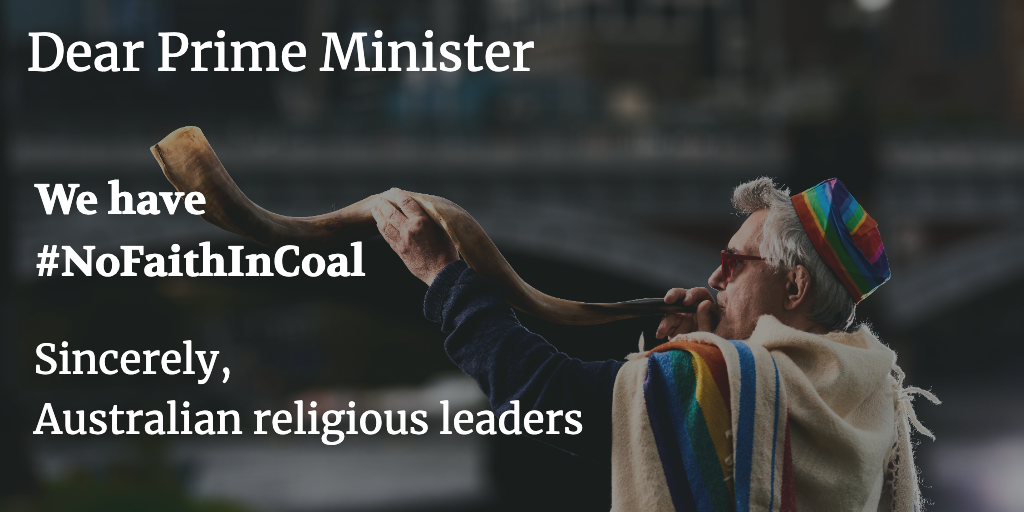 Common Grace's Climate Justice team support this letter and its requests, affirming that we too have #NoFaithInCoal. Our faith is the Lord Jesus Christ, who lived, died and rose to reconcile all things to God. By the power of God's Spirit and in response to God's love for us, Jesus invites us to love our Creator in return and see that care overflow to our neighbours. These spiritual teachings are directly relevant to the question of dirty energy today, when coal kills millions of people through particulate pollution and is rendering the whole planet less habitable for all of us, since it is a leading cause of climate disruption. Since love does no harm to a neighbour, we stand with people of goodwill to seek a reduction in these harms and the protection of God’s good creation.

If you support these goals and would like to increase the letter's impact, can you help make this story grow? Follow these steps:

1. Take a photo of yourself
A head-and-shoulders shot, if possible today, though anytime this week is still good.

2. Communicate visually
Wear something that makes it clear that you are a person of faith, or stand somewhere that conveys that.

3. Include a sign using the messages below
Make the writing large, bold and easily visible in the photo.

Please use one of these faith messages:
• Protect Creation
• Our shared moral challenge
• For the sake of all beings
• No Faith In Coal

For the sake of all beings
No new coal or gas

4. Post the photo on Facebook &/or Twitter
Along with a short statement about why you support this letter to the Prime Minister and using the hashtag #NoFaithInCoal.

5. Include a link to the letter online.
This can be found at https://www.arrcc.org.au/no_faith_in_coal

6. Ask others in your community to join in.