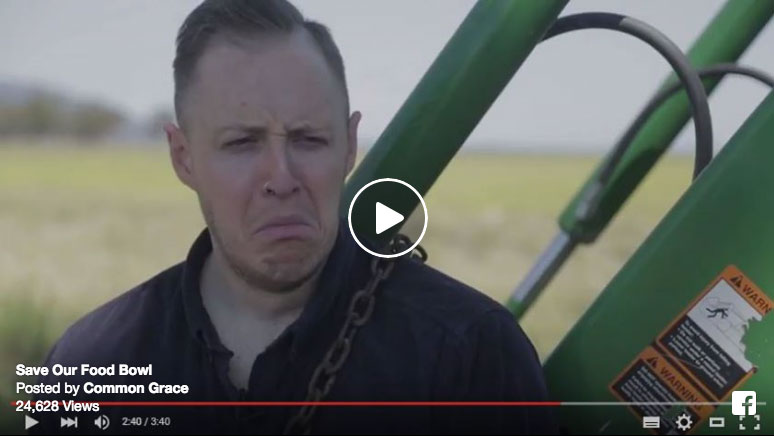 I'm Josh Hawkins. For some reason Common Grace made me the face of their new campaign. I guess they didn't have many options. What's it about? Check out the launch video!

Most of you are probably wondering “who IS this guy?” I'm a pastor by day and d-grade YouTube celebrity by night.

So how did I get here, emailing you? Jody from Common Grace contacted me and I said to him, "explain climate change as if I know nothing" (I actually knew nothing about it). I suppose I was one of those people that heard the words 'climate change' and thought, "Ah yeh, that's someone else's problem, my brain can't take in that much information" but as he explained I was like "OH MY GOSH WE NEED TO DO SOMETHING ABOUT THIS!"

So I went on a journey and met a legit climate scientist, two young farmers and even attempted my very first "I have a dream speech". Don't judge me - just watch the video.

I learnt that to solve climate change we need to transition to 100% clean energy. But right now, Shenhua Corporation are planning to dig a mine the size of 4620 football fields in the heart of Australia's food bowl! [1] They want to risk thousands of years of farming in Australia's best agricultural land for a 30 year mine that will make climate change worse.

Deputy PM and Minister for Agriculture Barnaby Joyce said, "it is ridiculous that you would have a major mine in the midst of Australia's best agricultural land" [2]. Then he said, "I've done everything in my power to try and stop the mine". But recently Mr Joyce was promoted to Deputy PM which means he now has more power to stop the mine. Hooray! As stewards of creation, let's urge Mr Joyce to to put his words into action and save our food bowl.

Last year Common Grace members put clean energy and homelessness in the public spotlight reaching millions of people. This time, let's raise our voice to protect our nation's food bowl and the climate.

As Michael Jackson once whispered “heal the world, make it a better place”. I think it’s like most things as a Christian, what are we called to do? Be like Jesus and put others first. There’s a problem and there's a solution. The only logical step if we follow Jesus is to get involved.

Sign the petition urging Barnaby Joyce to save our food bowl.