One of my favourite truisms is “No economy without environment.” All the possessions we have, the prosperity we enjoy, the food we eat, the cars we drive, comes from the environment. Yet many in our government would say that caring for the environment comes once we have a strong economy. But achieving our strong economy has come at the expense of the environment - we are eroding the foundation of our economy.

I was so saddened when my local member and now Prime Minister, Scott Morrison took a lump of coal into parliament. A cheap political stunt – one that tried to keep action on climate change as a ideological debate. I want our politicians to be forward looking. To remember there is no economy without environment. To not be climate change “believers” or “deniers” but to accept that climate change is a major risk to the well-being of humanity. And whilst a shift from our fossil fuel addiction is hard, renewable energy will actually be a long term boost to our economy. 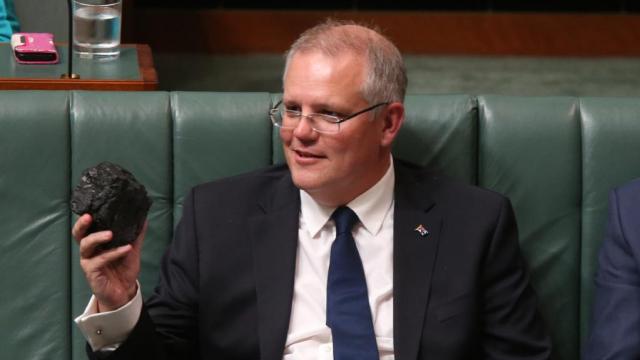 Prime Minister Scott Morrison (then Federal Treasurer) pulled out a lump of coal in parliament on 9 February 2017.

What can we do? A wise Christian friend once said to me that we can’t expect people to want to care for creation if they have no connection with it [1]. So get out into nature, and don’t rush. Immerse yourself in nature, marvel at God’s mighty power but understand that creation is groaning from the impacts of our lifestyle.

My church’s journey has seen us marvel at the universe and the incredible scale of God’s creation. A couple of years ago we reflected on Paul’s letter to the Romans where he said that “For the creation was subjected to frustration, not by its own choice, but by the will of the one who subjected it, in hope that the creation itself will be liberated from its bondage to decay and brought into the freedom and glory of the children of God.” (Romans 8:20-21). We were challenged on our God given responsibility to be stewards of creation. Just like us, creation awaits Jesus’ return.

In Genesis it says “Rule over the fish in the sea and the birds in the sky and over every living creature that moves on the ground.” Jesus showed us the example of being a ruler – humbling oneself, nurturing and serving. [2]

God has blessed me so much. I have received so much. Because I love God and desire the flourishing of all people, both now and in the future, I’m called to care for God’s creation.

With the election fast approaching, have you asked your candidate’s our questions about climate justice? Read the Climate Justice team’s questions and concerns for the coming Federal Election here.

[1] Here at Common Grace we have been made aware of the important connection between care of creation and connection to land through our Aboriginal sisters and brothers. See a reflection on this topic by Aboriginal Justice spokesperson, Brooke Prentis here.

[2] If you’re interested in thinking more about theological underpinnings to creation care, check out our Common Grace Season of Creation resources from last year here for more.

Phil Woods lives in Miranda, Sydney, with his wife and 4 teenage and adult children. After starting his career as a insurance mathematician, he was drawn into the environment profession 15 years ago, and currently works in energy strategy in the water industry. Phil is passionate about reducing waste and creating a circular economy. He is a member of Caringbah Baptist Church.